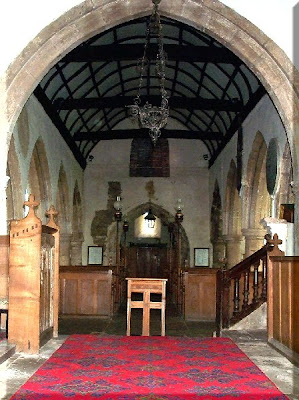 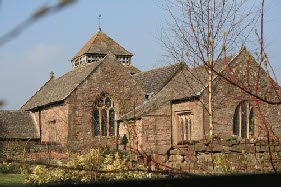 St. Bridget's Church in the village of Skenfrith in the Welsh Marches turned 800 years old in 2007.

According to Filbee, whose Flickr photos of this church are worth a look, St. Bridget's is a "13th century church with squat tower and huge buttress. The interior has a Jacobean pew, 15th century embroidery, and the tomb of the last governor of the Three Castles (Grosmont, Skenfrith, and White).

"St Bridget’s Church was founded in 1207 by Hugh de Burgh who was also responsible for building Skenfrith castle. The tower is unusual. It belongs to the period when the Welsh border was subject to sudden raids and the villagers might need to seek refuge at any time. The tower has five feet thick walls and is capped with a 'Dovecote' which in times of scarcity or danger could have housed pigeons as well as bells. The clock was installed in 1926."

He provides a link to Mark Collins' Roughwood site, with its page on St Bridget's. There are some excellent pictures here. The interior shot above comes from his page.

The UKAttraction site has this to add:

"The church, dedicated to the Irish Abbess Bridget, was built in the 13th Century in Early English and Perpendicular styles. It has a wooden dovecote-topped tower with an open wood lantern containing 6 bells. There is medieval glass in the East window, fragments of wall paintings and an ancient tomb chest with Elizabethan figures depicting the wife and eight children of John Morgan dated 1557. A rare pre-Reformation cope (a cape-like garment worn by Bishops) is preserved in a glass-fronted case."

This handy page provides links to attractions in the area of the church, places to stay, and so on.