Hot off the "Press": Under the Oak on Brigit, Daughter of Duffy 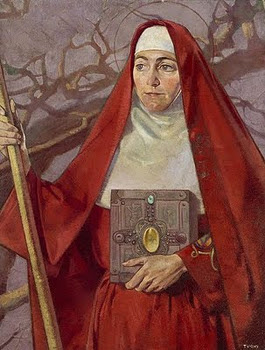 I've mentioned this blog before, and likely will again. Under the Oak is dedicated to postings on the Irish Saints, in particular Brigit of Kildare. Here is a snippet from her latest post:

Brigid, the Daughter of Duffy

A few days ago we looked at the feastday of Saint Dubhthach. I remarked then that this is a name borne by both Irish pagans and Christians, and suggested that perhaps the most famous of its pagan bearers was Dubhthach, the father of Saint Brigid of Kildare. It is also claimed that this name has been anglicized as the modern Irish surname Duffy, and it is in this form that Irish-American poet, Denis A. McCarthy (1870-1931), presents Saint Brigid as the champion of the poor and generous to a fault, something which provokes a culture clash with her pagan father...

The author of the post includes the poem by McCarthy, which begins thus:

BY DENIS A. MCCARTHY

BRIGID, the daughter of Duffy, she wasn't like other young things,
Dreaming of lads for her lovers, and twirling her bracelets and rings;
Combing and coiling and curling her hair that was black as the sloes,
Painting her lips and her cheeks that were ruddy and fresh as the rose.
Ah, 'twasn't Brigid would waste all her days in such follies as these -
Christ was the Lover she worshipped for hour after hour on her knees;
Christ and His Church and His poor, - and 'twas many a mile that she trod
Serving the loathsomest lepers that ever were stricken by God...

To see the whole post, and go through the archives which contain many a gem, please go to:

Unfortunately, Blogger is misbehaving and I can't hyperlink that for you, but I'm sure you know what to do!
Posted by Mael Brigde at 7:29 pm

Email ThisBlogThis!Share to TwitterShare to FacebookShare to Pinterest
Labels: Denis A McCarthy