First off: we have here three good, saint-oriented Brigidine picture books. Now we need some goddess-oriented ones.

It isn’t surprising we have three saintly versions and none focussed on the goddess aspects of Brigit. Among other things, there is an abundance of saintly stories and the goddess lore for Brigit is thin on the ground. Nevertheless, without it we have only half the story. I would like to see a picture book that addresses the triple Brigit, maybe even one that tackles both sides, Pagan and Christian, in a positive and simple way. There’s your gauntlet, writerly and painterly folk. (And when you do it, please send me a copy to review!)

The present books are quite different from each other in terms of both artwork and writing, but they do have a number of things in common. Interestingly, from among the many, many stories related to Brigit, stories of her cloak, in one form or another, figure in all three books. When you consider the pithiness necessary in a picture book, the brevity of the text which allows only a few aspects to be explored, it is perhaps surprising that the cloak figures in all three, though admittedly the cloak stories are among the most well known in her vitae. The cloak is a main focus in the first two, and more or less a footnote in the latest, by Jane Meyer. 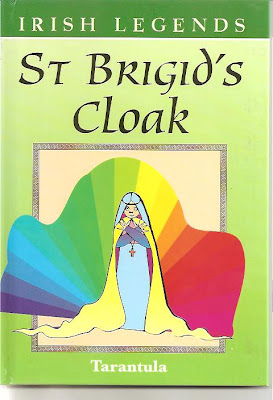 The first, St. Brigid’s Cloak by Reg Keating, is the smallest, shortest, and least elaborate in every way. Heather McKay's illustrations have a humorous, energetic style with simple, bold lines and Adobe Illustrator-type colour-pattern infills. The style is well-suited to Keating’s direct, simple, playful text and the underlying humour of the story.

The focus is narrow—after quickly giving us an idea of Brigit’s early life and desire to serve God, Keating tells a medieval tale of Brigit’s miraculous cloak. In this story, Brigit tricks a stingy king into giving her ample valuable land to build her monastery on by asking for merely as much as her cloak would cover, only to have the cloak grow enormously once on the ground.

This book is not written to entice children to holiness. It simply tells a fine and funny traditional story about someone who happens to be a saint and rather holy herself. It certainly doesn’t try to persuade against living a holy or moral life, and she is indeed presented as someone who works hard to do good, but that’s not the point. If anything, Brigit’s independence and cleverness are the important thing here.

By contrast, the two later books are more self-consciously Christian, and much more developed. 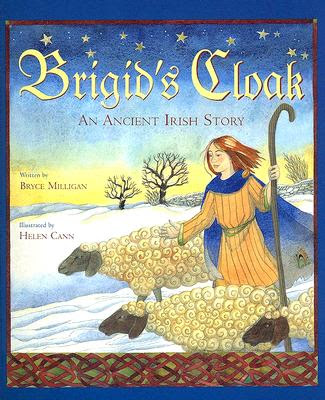 Brigid’s Cloak: An Ancient Irish Story, by Bryce Milligan, is a beautifully illustrated, textured book aimed at somewhat older children than Keating’s audience. In it we go beyond the bare facts of Brigit’s life to hear the wild winds of fifteen centuries ago, to huddle in a cold hut outside her father’s hill fort, to hear the stars singing and see a Druid in the forest, come to prophesy about Brigit’s life.

Brigit’s magically noted birth is followed in time by her vision (as in Norah Kelly's play based on the Scottish folk tale1) of being in Palestine. There she plays the role of the daughter of the innkeeper who shelters Joseph and Mary, and helps Mary with Jesus’s birth. The story of her cloak, in this case given by the Druid, is not the one where she tricks the King of Leinster into giving her lands, but the one where she lends her now shabby cloak to Mary, who is shivering as she lies in labour, and who returns it beautifully renewed. The story is centered on Christ’s birth, though inspired by Brigit’s devotion and generosity.

Milligan’s writing is subtle and often beautiful, and his tale touches on many evocative details that inspire a sense of wonder. There is an attempt at verisimilitude in the drawings of ancient Irish and Palestinian dwellings and dress, and the book closes with a page devoted to historical information about Brigit and her cloak. Helen Cann’s paintings are delicious, with subtle shades of colour that match the subtlety of the writing, and with energy, balance, and magic. 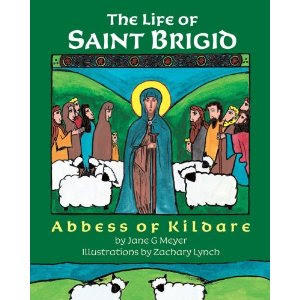 The Life of Saint Brigid, Abbess of Kildare, by Jane Meyer, is perhaps the most joyfully religious of the three books. Published by Conciliar Press Ministries and written and illustrated by members of the Orthodox Church, it is intended to share the story of Brigit’s generosity and devotion to others and to God, and to inspire similar love and compassion in the children who read it.

Meyer ranges farther in her treatment of Brigit than the previous two authors, telling more about her young life, including her penchant for miracles associated with milk and butter and including a prayer she uttered to God to bless her pantry, which led to such abundance. She then follows Brigit through her life, touching on a few brief, important moments, such as her father’s attempt to sell her to the King who would one day inadvertently supply the land for her first monastery, her refusal to marry (somewhat dodging, though alluding to, the self-mutilation that convinced her family to let her off the matrimonial hook), her peripatetic ways and the resulting monasteries she founded across Ireland. She ends the book with an “Irish Rune of Hospitality”, a brief prayer that we may follow Brigit’s example, and the “Kontakion of Saint Brigid”: a prayer about and to Saint Brigit.

Zachary Lynch’s rough and ready iconographic illustrations are perfectly suited to the text. A playfully reimagined cow from a medieval Irish manuscript, Celtic knotwork gone mad with colour, Brigit with a hint of Theotokas in her face—there is much to delight the mind and eye in these pages.

My only complaint about this last book is the Celtic typeface used for the main text. If, as an adult who has been reading for many years, I have occasional difficulty making out a letter and therefore a word, I can only suppose that a young reader might find such a typeface one more obstacle on the rocky road to reading. But since with picture books of this complexity you generally have an adult reading to a child, perhaps it isn’t that much of a problem.

Okay now, Pagani. Get out your pens and paints and come up with some equally impressive Pagan counterparts to these three books. Ready, set—go!

1 A version of this folk tale is found in the the Carmina Gadelica, a collection of stories, prayers, etc collected by Alexander Carmichael in the Scottish Highlands between 1855 and 1910.
Posted by Mael Brigde at 9:49 pm