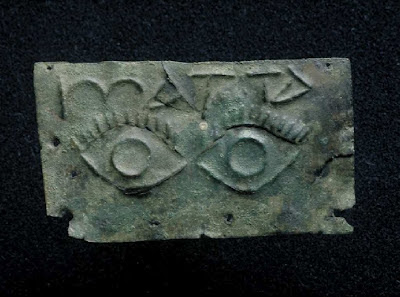 On hearing that a friend and follower of Brigit is developing cataracts, I remembered reading a number of tales of Saint Brigit that concern blindness. I wanted to look back through those stories to see if there was anything that might be of use for her. I often find some subtle insight offered if not in the tale’s intended message, then in some detail within it. This is a personal thing, and I doubt we would all find the same meanings, or any at all, necessarily. I have not offered all of these to her—it is probably not the time—but I will offer a few to you in case they are of use.

Brigit is no stranger to blindness. In a gruesome story from the 8th century "Irish Life of Brigid", the Bethu Brigte, Brigit blinds herself in order to block her forced marriage. She is miraculously healed with the aid of a stream created by her own staff, but all attempts to marry her against her will are ended. (She takes violent eye-related revenge on one of her brothers for his malicious part in all of this.)

There are many references in her Lives to Brigit healing the blind. In Faughart, her supposed birthplace, one of her bullaun stones has the power to heal spiritual blindness.

But she didn't always cure the affliction. In the Leabhar Breac (Speckled Book) of the 15th century, it says, “She bettered the sheep: she tended the blind: she fed the poor.” Tended does not necessarily mean cured. If caring for, and not curing, is what is meant here, this suggests to me that there are times when she finds it preferrable to leave things as they are. In looking at my own life, I know that, painful as it is, sometimes we don’t gain the outcome we want and pray for—yet sometimes another outcome, very much unwanted, leads to a different blessing altogether.

A couple of her tales hint at this.

Once, Brigit relied on a blind man to assist her when no one else was able1. Inspired by a vision, Brigit wished to have the whole Roman ritual and liturgy brought to her. Three times she sent disciples to Rome to fetch it. Twice they returned having forgotten everything they learned. The third time she included with the disciples a “certain blind protégé” of hers who was blessed with the ability to remember everything perfectly. En route the pilgrims met with a storm and dropped anchor; they were afterwards unable to retrieve it. Drawing lots, the blind man was given the job of diving deep to recover the anchor, but although the ship was freed, he did not return. He was lost until the crew met the same difficulty on another day, being forced to drop anchor in the same place. When they hauled the anchor aboard he climbed up with it, carrying the Roman Rite and a bell that came to be known as the “bell of the blind son.” This story was meant to show Brigit’s support for the Roman versus the Irish Christian traditions,which I suspect wasn’t a big interest of Brigit’s, given when she lived. What I find interesting, though, is that the only person with the wisdom and vision to perform her miracle is the one man without sight.

“One evening, she sat with Sister Dara, or Daria, a holy nun, who was blind2, as the sun went down; and they talked of the love of Jesus Christ, and the joys of Paradise. Now, their hearts were so full, the night fled away whilst they spoke together, and neither knew that so many hours had sped. Then the sun came up from the Wicklow mountains, and the pure white light made the face of earth bright and gay. Bridget sighed, when she saw how lovely were earth and sky, and while she knew that Dara s eyes were closed to all this beauty. So she bowed her head and prayed. She extended her hand and signed the dark orbs of the gentle sister. Then the darkness passed away from them, and Dara saw the golden ball in the east, while all the trees and flowers glittered with dew in the morning light. She looked a little while, and then, turning to the abbess, said: “Close my eyes again, dear mother, for when the world is so visible to the eyes, God is seen less clearly to the soul.” So Bridget prayed once more, and Dara’s eyes grew dark again.”

2Apparently she was blind from birth.