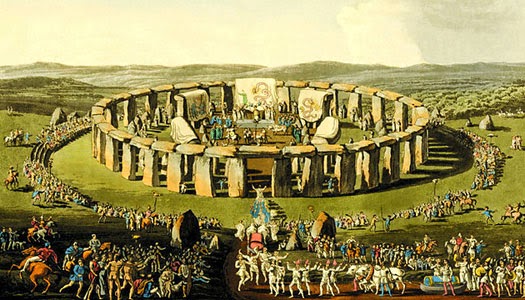 I have only the slenderest excuse for putting this discussion on a Brigit blog--she is mentioned, very briefly, with regards to her father, Dubhthach--but it is such an interesting look not only at the subject of Druids through the eyes of the scholars who make their livings contemplating them, but also at a few of the scholars who, for most of us, are names in a book, not voices, laughter, and interplay.


The discussion is from BBC Radio 4's excellent In Our Time with Melvyn Bragg. BBC has a habit of chucking podcasts after a while so I downloaded the program and set it into a video format to present on Blogger. Once you have seen the first image you will have seen them all. I'll add the credits and so on here, to spare you searching them out on the screen.


Melvyn Bragg and his guests discuss the Druids, the priests of ancient Europe. Active in Ireland, Britain and Gaul, the Druids were first written about by Roman authors including Julius Caesar and Pliny, who described them as wearing white robes and cutting mistletoe with golden sickles. They were suspected of leading resistance to the Romans, a fact which eventually led to their eradication from ancient Britain. In the early modern era, however, interest in the Druids revived, and later writers reinvented and romanticised their activities. Little is known for certain about their rituals and beliefs, but modern archaeological discoveries have shed new light on them.


Barry Cunliffe
Emeritus Professor of Archaeology at the University of Oxford


Justin Champion
Professor of the History of Early Modern Ideas at Royal Holloway, University of London


Miranda J. Green, ‘Exploring the World of the Druids’ (Thames and Hudson, 1997)


Michael Hunter, ‘John Aubrey and the Realm of Learning’ (Duckworth, 1975)


Ronald Hutton, ‘Blood and Mistletoe: The History of the Druids in Britain’ (Yale University Press, 2009)


Sam Smiles, ‘The Image of Antiquity: Ancient Britain and the Romantic Imagination’ (Yale, 1994)