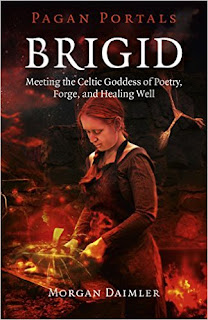 An excellent primer, and the best available for getting a a handle on the sources, ancient and modern, for our understanding of Brigit. I can't recommend it highly enough.

Morgan Daimler is the author of a number of books and shorter works of poetry, fiction, and nonfiction, and is gaining a reputation for clearly written, well researched, and extremely useful handbooks such as this one on Brigit.

Brigit is the spiritual being to whom I have devoted decades of my life, in study and devotion and in supporting others in their journeys on Brigit’s path. I discovered in Pagan Portals—Brigid, to my joy, a book that wastes no words—it is a slim volume indeed—but packs into those pages more clear and illusion-lifting information than I have ever seen set out about Brigit.

The reason is this: Daimler has gone straight to the medieval texts, finding references to Brigit and explaining them lucidly—indeed, clarifying for the reader which text treats her in which way, rather than allowing them to blur together in our minds; she tackles the early geography of goddesses-who-may-be-Brigit; she takes the complex blend of ancient, folk, and modern conceptions of Brigit and sorts them deftly out so the reader can see where commonly heard assertions come from and make up her own mind about where to follow and where not.

Daimler explores animal and plant associations and symbols commonly associated with Brigit, such as triplicity, touches on her holidays, prayers, chants, and charms, and looks at the rise of  modern Brigidine myths and flame-tending, as well as providing hints for honouring Brigit today and supplying a diverse resource list and bibliography.

She ends each chapter with a short essay on her personal connection to Brigit, thus grounding the theory in personal practice. Indeed, although emphasis is put on making assertions supported by solid academic material and distinguishing these from our personal beliefs, she is careful to point out that she does not believe that “the religious framework we use to connect to the Gods matters as much as the effort to honor the old Gods itself. I think we can all do this respectfully and with an appreciation for history without the need for any particular religion. Whether we are Reconstructionists, Wiccans, or Celtic pagans all that really matter is that we are approaching our faith with sincerity and a genuine intention.” I would add that this book would be useful to anyone interested in Brigit, goddess or saint, be they NeoPagan, Christian, or secular scholar, for the information is so well laid out that any further studies or devotions would only be enhanced by the reading of this book.

Pagan Portals - Brigid is a basic introduction to the Goddess Brigid focusing on her history and myth as well as her modern devotion and worship. Primarily looking at the Irish Goddess but including a discussion of her Pan-Celtic appearances, particularly in Scotland. Her different appearances in mythology are discussed along with the conflation of the pagan Goddess with Catholic saint. Modern methods for neopagans to connect to and honor this popular Goddess include offerings and meditation, and personal anecdotes from the author's experiences are included as well.

Who was Brigid to the pre-Christian pagans? Who is she today to neopagans? How do we re-weave the threads of the old pagan Goddess and the new? Learn about Brigid's myths among the pagan Irish, the stories of Bride in Scotland, and the way that people today are finding and honoring this powerful and important deity to find the answer.