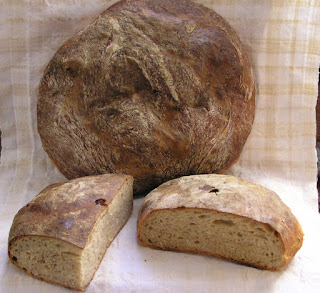 
4 Then eight other virgins also received
the veil together with saint Brigit and the
virgins with their parents said, 'Don't leave
us. Instead stay with us and make your
home in these parts.'

5 Thereafter saint Brigit stayed with them.
One day there came to Brigit
and her nuns three devout men who were
pilgrims and she regaled them with bread
and cooked bacon. The men ate the bread
but hid the three portions of bacon as they
did not want to eat it.

2 The following day Brigit greeted them
and said, 'See how much bread you have
left over!' When they looked they saw that
the three portions of bacon were three
loaves of bread.

From "Vita Prima Sanctae Brigitae Background and Historical Value", by Sean Connolly. The Journal of the Royal Society of Antiquaries of Ireland, Vol. 119 (1989), pp. 5-49.