IMBOLC – Wednesday 1st February 2017
The Friends of Brides Mound invite you to join us for the day, the feast day of St. Brigid.

1pm Walk to Bride's Mound with Serena Roney-Dougal;
Meet outside the White Spring, where the White and the Red springs join.
Wear clothing and footwear suitable for wet and muddy conditions!
2.30pm Gathering around the fire on Bride's Mound.

As you might have seen on the national news, Richard Brunning of Southwest Heritage Trust led a team doing the first archaeological dig on the mound since Philip Rahtz’s dig in the 1960s. All very exciting!

Initially GeoFlo surveyed the area, which clearly showed up the third building that Beth Francis of Avalon Archaeology Group had found when doing the resistivity survey for the Friends in the 1990s. They also found traces of a ditch around the buildings, and a possible site for the Well. GeoFlo are now doing a survey of the ridge field, which has never been fully surveyed though Beth did survey part of it.

Richard and team uncovered the eastern end of the chapels and removed some of the skeletons. 35 of these had been removed by Philip Rahtz in the 1960s and were dated to approximately 700AD, but radiocarbon dating in those days was less exact than it is now, so he wanted some more for more accurate dating and for analysis of the bones, to attempt to determine where the people had come from. Hopefully, this time the skeletons will be re-interred after the analysis has been done. 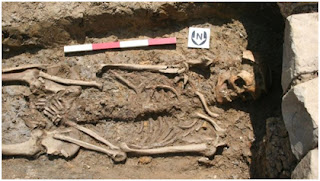 This is the exciting bit – the skeletons are now dated to the 5th century. This means they are Romano-British, Celtic people. As all the skeletons are male, apart from one female and a child, this suggests a monastic community, possibly Celtic Christian.

This bit is uncertain but accords with the legends that there was a chapel site on Brides Mound at the time of King Arthur (also 5th century), and that St. Bridget visited the community when she came to Glastonbury – also in the 5th century!!  So it is just possibly that our myths and legends have some truth to them.

Richard and team also dug a trench across the building Beth had found and discovered that it had lots of 12th and 13th century pottery and animal bones, suggesting that it was a place where people stayed and therefore might have been a pilgrims hostel. The legends state that pilgrims used to come across the ford of the river at the end of the ridge field and stay for 24 hours at the chapel before going on up to the Abbey.

A third trench was dug across the ditch that Geoflo had found in their survey and this has been dated to Iron Age! This means that the site has been used for something for over 2,000 years. The nearby Lake Village is dated to 250BC so this ditch, for whatever reason it was dug, could be connected with that.

It was really lovely to see the chapel site and Bob Croft of South West Heritage Trust is planning to mark the walls of the chapels on the surface of the mound so that we can get a better feel for the area that they cover. I was surprised to see that the chapel is not on the top of the mound, but on the southern slope. It’s siting does however give a particularly good view of the Tor!

Richard Brunning will give a talk to the Glastonbury Antiquarian Society on Friday 19th May at 7.30pm, where he will let us know all the details including analysis of the bones to try and determine where the people came from. He is also planning an exhibition of the finds at the Red Brick Building. When we know day and time we’ll post it on our Facebook page https://www.facebook.com/Friends-Of-Brides-Mound-491438764242153/  and website http://www.friendsofbridesmound.com/index.html

As always, we want you to know how grateful we are for your financial support. Your support has meant that we have been able to pay back £2,000 off our loan with Triodos Bank this year alone, which lowers our monthly repayments. We have been able to pay for help with the upkeep for the land, instead of it falling to just one of the committee. And with the exciting archaeology happening, we have enough to engage the best team to help us survey the land and hopefully find the original position of a well/THE Brides Well. All of this YOU have made possible!

It is most useful for us if you can pay by standing order, and there are a number of you that do. On top of that some pay yearly and this is great too. On behalf of the committee, I want to take this opportunity to say a BIG Thank YOU! It feels good to know you are backing us in the work we do. Please keep supporting us, fill in the form with your annual Friendship fee or keep your standing order payments coming (or set one up if your haven't yet and want to). Brides Mound has been transformed over the years by the input of so many and that includes you.

We are at last able to proceed with the hedge-laying project.  This is for the hedge that extends all the way along the Ridge and down to the pond.  It was restored and re planted with a grant of £2,322.00 and donations, in the hope that it could eventually be a laid hedge and we now have a grant for £3,543.80 for hedge laying and with this amount and a generous donation of £1,000.00, have most of the finances needed to also include work on the hedge between the Ridge field and the mound so that the contours and views of the mound and ridge can be appreciated.  It is also good for the health and effectiveness of the hedge.

I have also received free, 100 saplings from the Forestry Commission for gap planting.

If any one would like to volunteer, work will take place in the spring and instruction on hedge laying will be given. Please contact me on our e-mail address above. 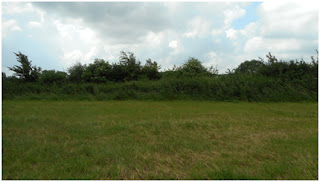