Our Lady of Multiple Personalities 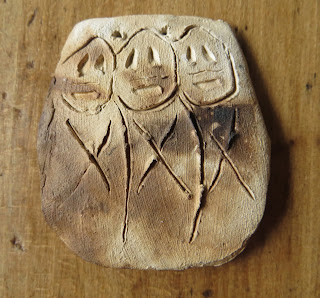 A couple of comments made by participants in one of my Brigit courses triggered a new understanding of how Brigit can help us today.

Many survivors of trauma, particularly childhood trauma, have learned to cope with their mental and emotional injuries by dissociating, by disappearing from a particular emotion, moment, memory as best they can. Sometimes this manifests as more than one personality to deal with the varied pressures of life.

One of the conundrums that faces many Brigidines is the question of who exactly is Brigit. Is she a goddess who became a saint? A saint reinterpretted as a goddess? A single goddess with three aspects (of smith, healer, and poet), or three goddesses, three sisters overseeing each of these arts, as the 9th century text Sanas Cormaic tells us?

Instead of this being a problem which must be solved or lived with in some way, this can be a beacon to those of us who struggle with past traumas in ways that invite us to split off from ourselves. For it is clear today that this powerful saint and these powerful goddesses, though unique and very different from one another, reside together in a single phenomenon that bestows much good on our world.

So to Brigit, Our Lady of Multiple Personalities, I give thanks and praise. To each Brigit, solid and real in herself, I give praise and thanks.

eMentalHealth.ca has a useful page on dissociation, it's symptoms and treatments.

from the site of International Society for the Study of Trauma and Dissociation:

What is dissociation?
Dissociation is a word that is used to describe the disconnection or lack of connection between things usually associated with each other. Dissociated experiences are not integrated into the usual sense of self, resulting in discontinuities in conscious awareness (Anderson & Alexander, 1996; Frey, 2001; International Society for the Study of Dissociation, 2002; Maldonado, Butler, & Spiegel, 2002; Pascuzzi & Weber, 1997; Rauschenberger & Lynn, 1995; Simeon et al., 2001; Spiegel & Cardeña, 1991; Steinberg et al., 1990, 1993). In severe forms of dissociation, disconnection occurs in the usually integrated functions of consciousness, memory, identity, or perception. For example, someone may think about an event that was tremendously upsetting yet have no feelings about it. Clinically, this is termed emotional numbing, one of the hallmarks of post-traumatic stress disorder. Dissociation is a psychological process commonly found in persons seeking mental health treatment (Maldonado et al., 2002).
Dissociation may affect a person subjectively in the form of “made” thoughts, feelings, and actions. These are thoughts or emotions seemingly coming out of nowhere, or finding oneself carrying out an action as if it were controlled by a force other than oneself (Dell, 2001). Typically, a person feels “taken over” by an emotion that does not seem to makes sense at the time. Feeling suddenly, unbearably sad, without an apparent reason, and then having the sadness leave in much the same manner as it came, is an example. Or someone may find himself or herself doing something that they would not normally do but unable to stop themselves, almost as if they are being compelled to do it. This is sometimes described as the experience of being a “passenger” in one’s body, rather than the driver.
There are five main ways in which the dissociation of psychological processes changes the way a person experiences living: depersonalization, derealization, amnesia, identity confusion, and identity alteration. These are the main areas of investigation in the Structured Clinical Interview for Dissociative Disorders (SCID-D) (Steinberg, 1994a; Steinberg, Rounsaville, & Cicchetti, 1990). A dissociative disorder is suggested by the robust presence of any of the five features.

Email ThisBlogThis!Share to TwitterShare to FacebookShare to Pinterest
Labels: Brigit Courses, Dissociation, eMentalHealth.ca, International Society for the Study of Trauma and Dissociation, Our Lady of Multiple Personalities, Trauma