I am republishing my review of Bernhardt-House's article in celebration of the fact that he has uploaded the paper to Academia.edu, making this hard-to-find piece easy to obtain. Thank you, Phillip! (Click here to view or download.) 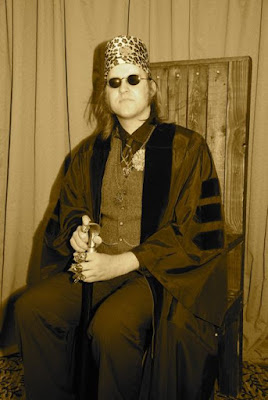 This intriguing article looks at the meaning of Imbolc from a new perspective—that of a connection with wolf and warrior cults originating with the Indo-Europeans and presenting in Roman and Celtic civilizations. Bernhardt-House has a broad knowledge of the literature and he brings together disparate pieces into a tantalizing whole. Where he himself concludes that his new etymology may be proved unsound, it nevertheless serves to “refocus our attentions on certain smaller aspects” of Imbolc, particularly the wolf aspect, which is “now beyond doubt as having been important to the holiday as it would have been observed in pre-Christian times” (pg 65-66).[1]

In approaching the subject, Bernhardt-House first looks at both Neo-Pagan and scholarly etymologies of the Irish word for the festival, Imbolc. While accepting the consensus meanings of milking and purification, he suggests an additional—and surprising—one.

If im has as its basis “butter”, olc is generally derived as “evil, bad, wrong” in Irish, both Old and Modern. But Kim McCone[2] traces this word back to the Indo-European root meaning “wolf”. Joining these two, Bernhardt-House offers “Imbolc as the 'butter-wolf'”, hoping to “shed some light on further images in Irish sources, as well as connecting this to a further complex within Indo-European ritual” (pg 60).

These images in Irish sources range from calendrical evidence linking February to wolves, the association of Candlemas in France and Belgium with the wolf (where a wolf sighting predicts the ending of winter), of Brigit herself with the bear and wolf, and so on, along with an examination of the period of time between Samhain and Imbolc and its association with warring, as well as hospitality.

Perhaps most interesting is the parallel drawn between the rites of the Lupercalia in Rome and Imbolc in Ireland, and their potential links to Gaulish deities and to earlier rituals. The link with purification in both festivals is already established; the writer points to a possible further link in purification with the use of milk or, in the Irish case, butter.

The young Roman priests, the Luperci, sacrificed a dog and a goat at the cave where Romulus and Remus were said to have been nursed by a wolf. The blood of these two animals was mixed and the youngest priest's forehead anointed with the mixture; this was then cleaned away using a piece of milk-soaked wool, which ritual was followed eventually by striking the general populace with goat-skin thongs for luck and fertility.

In a medieval story St Brigit removes the signs worn by men which signify their engagement in activities of war; Bernhardt-House suggests that if “some form of Brigid was one of the presiding deities of Imbolc, Brigit who was bear-mother in origin but could easily have been a wolf-mother in Ireland, might have been the deity who removed these warrior-signs and reincorporated the youthful fian-warriors into regular society, perhaps by the means of the purifying medium of milk, or, given the etymology I have suggested with imb-, perhaps even butter” (pg 64).

The details examined by the writer are greater in number and scope than suggested by this brief review, and it is worth tracking down the article through your local or university library.[3]

This is just the sort of thing that gets the creative mind churning along nicely. A very enjoyable article.

[1]     For a complete review of the wolf and werewolf in Celtic literature and an examination of that material, see Bernhardt-House, Phillip A., Werewolves, magical hounds, and dog-headed men in Celtic literature: a typological study of shape-shifting, Lewiston, NY: Edwin Mellen Press, 2010.
[2]     See my review above of his Brigit section, “Fire and the Arts” (etc) in Pagan Past and Christian Present in Early Irish Literature, Kim McCone (1990)
[3]     For a posting in the NeoPagan blogosphere see http://www.patheos.com/community/paganportal/2011/02/01/the-hidden-imbolc/. For a discussion  in a Celtic Reconstructionist forum of both the blog post and this peer-reviewed article, see http://community.livejournal.com/cr_r/351977.html In particular see the comment from

wire_mother: “I've read the original article from which PSVL derives this thesis (Bernhardt-House, Phillip A., "Imbolc: A New Interpretation", Cosmos 18 (2002), 57-76), and I buy the argument on the basis that OIr. olc very plausibly derives from PIE *wlkwo- "wolf" (which gives us English "wolf"!, and which through simple metathesis gives us *lukwo-, from which we derive e.g. English "lupine" from Latin) and also very plausibly shows semantic drift into its current meaning of "bad, evil" given the Christian experience of the youthful warrior/lycanthropic bands in Ireland; that it shows a definite relationship to Lupercalia, which seems to be a Latin reflex of the same ritual impulse; and the relationship of St. Brighid to the outlaw bands (all of which elements are discussed in that article by PSVL). For disclosure, I know both Prof. Bernhardt-House, the author of that article, and PSVL in person, and have discussed the issue with them many times, but even so, the three points I list here are more solid than even the assumption that we can derive pagan practices from e.g. folklore. That is, we have solid linguistic grounds (any linguist can easily derive that using tested rules of language change - one would have to dismiss nearly the entire field of linguistics to dismiss that point), solid comparative grounds (in the same region, even, and from a tradition which is linguistically closely related - one would have to dismiss the concept that religious ideas refer to the past in any way to dismiss that point, which would require one to dismiss the concept of any continuity of pagan religion at all), and solid hostile testimonial grounds (and the evidence for those youthful warrior-bands being also self-consciously, as well as community-consciously, considered to be "lycanthropic" is extensively documented across Europe, in the Celtic countries, and specifically in Ireland).”

As the "wire_mother" account was mine, I feel like I should explain that I was deliberately separating the identities of "PSVL" and "Prof. Bernhardt-House" since that was eir wish at the time. At this time, the two identities have been merged on the internet, such as in the "New Thinking Allowed" interviews which can be found on YouTube. Other than that, I stand by my comment there completely.