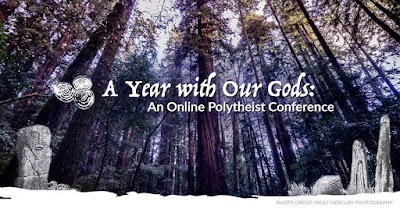 I am very late to the game in sharing this review with you. I just stumbled across it quite by accident, while looking something up on DuckDuckGo. [Edit: Ha ha! I actually posted about it at the time, but I just gave a link. Doh.]

Potia Pitchford, Scottish Hearth Druid, wrote an extensive review of Land, Sea, Sky Travel's first online conference, which happened eighteen months ago. With her permission, I am reposting the review here, but follow the link if you would like to read it in its natural habitat, Musings of a Scottish Hearth Druid.

“Brighid: Her Flame Burns Brightly” was an online conference organized and hosted by Land Sea Sky Travel as the first in a series of conferences. The series is called “A Year With The Gods” and they have plans for online conferences spaced through the year close to the more commonly recognized Pagan festivals.
As I have had a devotional relationship with Brigantia for many years I decided that trying to attend this online conference should be a good experience for me with the added benefit of devoting time to Her that day.  I was however a bit nervous as I had not experienced this type of online conference before.  I needn’t have worried.
The software used was Zoom which has a freely available client for a participant.  The software has some good support information and I didn’t have any problems with downloading the client or testing my set up.  The organisers of the conference were also available via email and Facebook with advice in the days before the conference.