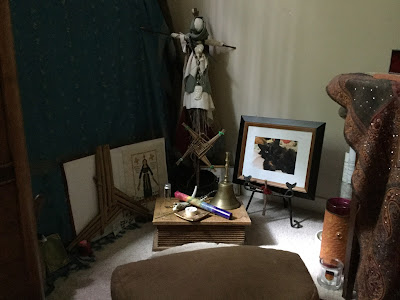 I have a humble floor altar where I do my formal Brigit connecting—lighting my shift candle, making prayer requests, making offerings. Keeping it simple is important to me; I’ll leave it at that for now.

This morning I was vacuuming and dusting and was paying some attention to the altar, when I realised I didn’t remember what I kept in that wooden, book-shaped box I use as the base for the bell, water, and candle. So I opened it.

I had emptied out the Buddhist texts when I put it there, and forgotten it. 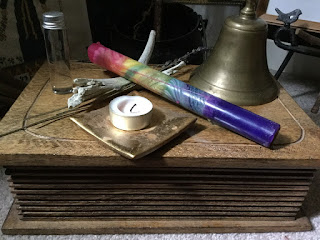 It seemed a good idea to put something in it now, sitting at the Brídeóg's feet and surrounded by the tools of honouring her. But what?

It isn’t good for storage. Too much bother to get out a candle every time I need one, and an insufficient use of the space. I wanted something meaningful, but something I wouldn’t need to get at all of the time.

I found it in the oak chest my mum and I (mostly my mum) refinished many years ago. Tiny treasures. A piece of birch bark my brother Vic gave me when he was a child. A devil mask my nephew Stuart gave me when he was the same age. Coins from Ireland, pre-E.U.. Coins from my trip to Europe and dear friends this fall. A bread bag from Haiti. Coasters my gramma's sister crocheted. My gramma's pin from Saint Hubert, Saskatchewan. The amber necklace I was so passionately drawn to at a science fiction convention many, many years ago. I kept going to look at it again, and talk with the woman who was selling it. But it was $30, and I had very little money, barely enough to eat.

She gave it to me. Generously, joyously, because she wanted to give me some joy, too...

Many little, precious things that when I die will be discovered and wondered at. A broken watch my aunt had given me. Me. She had actually given me something. I must exist to her, after all. 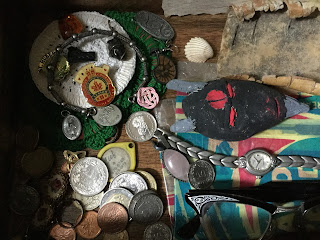 I could not put in the box, partly because I want to be able to see it, to begin to enact some transformation in my angered and injured heart, a picture drawn for me by one of my sisters before she hated me. Partly also because that wound goes too deep. I don’t yet want her there. So I placed her picture behind the Brídeóg, in the shadow but visible, still gathered near to Brigit, but far enough away from me that I can breathe. 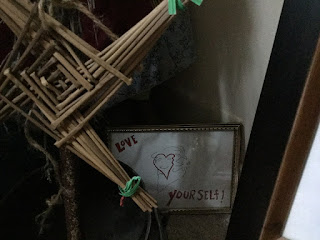 My hopes, my sorrows and losses, my joys, my loved ones, beloved strangers, all gathered together in this safe enclosure, at the feet of Brigit, under her protective gaze.

I feel everything right now, every emotion attached to all of these small objects and the many more I no longer have or never did. Each of them, all of them, in her gentle embrace. And so the treasure chest is filled. 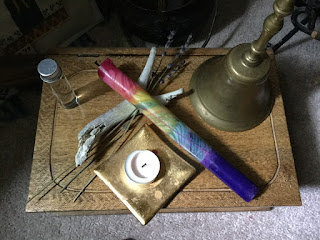