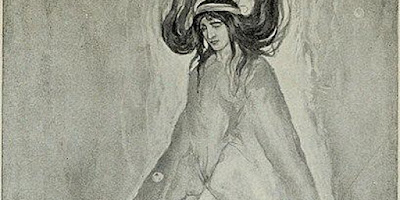 So, there is a lecture coming up online by Professor Ronald Hutton, which looks in part at why the saint and the goddess seem so dissimilar. It is hosted by The Viktor Wynd Museum & The Last Tuesday Society, and will happen on the 23rd of February, so lots of lead time.

This talk is designed to look at the evidence for both goddess and saint, and the possible relationships between them.

Brigid (or Bridget, or Bride) is the most popular Irish goddess in the modern world. This is partly because of her bountiful and gentle nature, as a patroness of handicrafts (especially smithwork), poetry and healing, and partly because she is also revered as a major Christian saint, the patroness of Ireland, with a rich heritage of stories attached to her. She thus acts a a connecting point between the religions. The general supposition is that the goddess had an equal importance in pre-Christian times, and evolved into the saint. If that is so, however, why are the pagan and Christian figures so different, and why are there so few actual references to the goddess in medieval texts? This talk is designed to look at the evidence for both goddess and saint, and the possible relationships between them.

Professor Ronald Hutton is a Professor of History at the University of Bristol. He is a leading authority on history of the British Isles in the sixteenth and seventeenth centuries, on ancient and medieval paganism and magic, and on the global context of witchcraft beliefs.

Tickets may be purchased here.