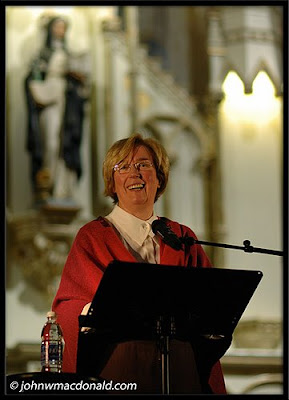 Brigit, Harbinger of Spring (click here for link to CBC archive of this interview)

Mary Hynes of Tapestry, CBC Radio One, interviews Mary Condren, Irish Brigit scholar and author of The Serpent and the Goddess.

Tapestry is a thoughtful and often inspiring weekly program on spirituality and religion.

The spring equinox arrives in a few days. On the pagan calendar, it is already here. The Celtic season of Imbolc began back in February. Its patroness is Brigit; part saint, part myth, ancient symbol of the Divine Feminine, and of a frozen world coming back to life. Mary Hynes speaks with Irish scholar Mary Condren about the renewed interest around the world in Brigit, fifth century saint from Kildare. Mary Condren teaches at the Centre for Gender and Women’s studies, at Trinity College, Dublin. She is also the author of The Serpent and the Goddess: Women, Religion and Power in Celtic Ireland.

A poem by Anne O'Reilly, read by Mary Condren:

These words will never carve your image out of bog oak
But that is what they want to do:
To dig down into the moist wetness,
To touch the layers of centuries that have made you,
Woman, Goddess, Saint
To see your shape emerge in tact from the ancient earth.
The fine coat of resin will preserve your beautiful shape
In tact, and I will call on you, Great Woman
To grace me with a golden branch and tinkling bells.
And I will polish you then with images of
Sun and moon and cows,
Sheep, serpent, vultures,
Bags, bells, bats,
And sacred fires.
So that you become a fiery arrow,
And breath life into the mouth of dead Winter.
As it is in these days in the lives of women, whose
Spirits have ceased to quicken.
Nurture them with your milk,
Be midwife to their birthing,
Release them from all that hinders them.
O! beautiful vessel still in tact, where we have unearthed you,
Remind us of your many manifestations,
And let us smile again in memory.
Your cloak spread in the green field of Kildare;
You who turned back the streams of war;
Whose name invoked stilled monsters in the seas
Whose cross remains a resplendent, golden, sparkling flame.
Come again from the dark bog, and
Forge us anew!