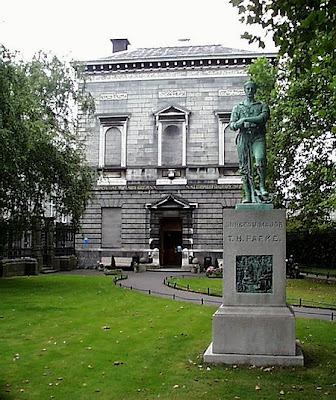 The Institute for Feminism and Religion sent out this notice:

Dublin City Council is proposing renaming Merrion Square in the centre of Dublin. Currently it is called Archbishop Ryan Park, a name that has never "caught on".

The deadline for submissions is Friday April 23rd.

A campaign has been launched by several to rename it Brigit's Park, after Brigit -- goddess, saint, poet, healer, smithworker, pagan.

Below is the official announcement from Dublin City Council and also a copy of a letter that Mary Condren wrote to the Irish Times in support of that proposal.

To date NO submissions have been received by DCC in support of the "Brigit" proposal, and no significant parks in Ireland are named after women.

Please take a minute to respond to this call, and to circulate the information among your contacts and friends. Support is welcome from all over the world, not only from within Ireland. You can write to this address:

Dublin City Council invites submissions and/or suggestions from members of the public and interested parties on the possible renaming of Archbishop Ryan Park, Merrion Square, Dublin 2.

Those sending submissions/ suggestions on the issue should state:

· If in favour, the suggested name

If including reasons for a suggested new name please restrict this to a maximum of 300 words.

Submissions/ suggestions can be made in writing or by email to:

I write in support of the proposal to rename Merrion Square after Brigit (the Old Irish spelling!).
Brigit is non-denominational, pagan, pre-Reformation Christian, and post-Christian. Matronness of poetry, healing and smithwork, she symbolises an Old European tradition of female empowerment and her traditions cultivate a dialectic between the sexes, so badly lacking in the recent centuries of Christian history.

Renaming a city centre park (perhaps Brigit's Garden?) would begin the process of reclaiming a much neglected facet of our common heritage and signal the potential for a new cultural and spiritual awakening that draws on the past but looks toward the future in a spirit of poetry, healing, and cultivating inner fires of integrity and justice.
Posted by Mael Brigde at 11:08 am