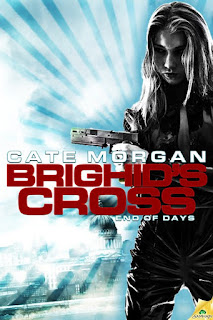 I won't even begin to address the "all things fire and warfare" bit. I hesitate to post this but if I can tell you about Brigit socks, surely I can't hold this one back... I haven't read it, so I can't say if it satisfies all its claims. If you read it, let us know!

One woman with a job to do. One gorgeous hacker with a plan. One apocalypse. Any questions?

Aika Lareto is a descendent of St. Brighid in her incarnation of all things fire and warfare in a time when heroes were revered as gods. In 2025, this means Aika is hunted by all things demon and government. All she wants is to get on with her work as guardian of the dregs scraping out a fringe existence in London’s blitzed underground—the lost, forgotten and the just plain ignored.

Declan Pryce is the hacker who finds her first. Quite a feat, considering current ruling government conglomerate Dreamtech has issued a bounty on Aika’s head for her ability to bypass their security systems.

When she escapes Dreamtech’s net, the vote is unanimous—Aika is a liability in need of immediate resolution—dead or alive is entirely her choice.

No choice, really. She’ll take death over disloyalty every time. Declan has a plan that doesn’t include falling for an impossible woman in an impossible situation. She has plans of her own that don’t leave room for a love life.

Contains a hot hacker with a penchant for redheads, battles with demons, a little light torture, explosions and a heroine willing to do whatever it takes to do her job.
Posted by Mael Brigde at 11:34 am