Online Paper: Brigit of Kildare and the Liminality of Women's Spiritual Power 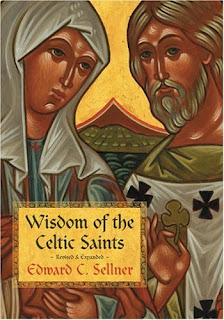 Many of you will know the American theologist Edward C. Sellner through his books on Celtic saints ( eg Wisdom of the Celtic Saints) and on the anam cara (Celtic Soul Friend). Here is a paper by him that you may find of interest: “Brigit of Kildare, Golden Sparkling Flame: A Study in the Liminality of Women's Spiritual Power”.

Posted on Ohio State University's Monastic Matrix (a scholarly resource for the study of women's religious communities from 400 to 1600 CE), it was first published in Vox Benedictina: A Journal of Translations from Monastic Sources 8/2 (1991): 265-296.


"Sometime in the 1180’s, the mediæval churchman, pilgrim, and story–teller Gerald of Wales visited Kildare in Ireland, made famous, he says, by the “glorious Brigid.” There, as he tells us in the controversial book he wrote after his tours of Ireland, he found Brigit’s fire, said to be inextinguishable:

"It is not that it is strictly speaking inextinguishable, but that the nuns and holy women have so carefully and diligently kept and fed it with enough material, that through all the years from the time of the virgin saint it has never been extinguished.

"Gerald of Wales, of course, was not the first pilgrim to visit Kildare, but he has provided us with one of the most vivid accounts of that monastic site and the legends associated with it centuries after the death of its foundress. Judging from his books on Ireland and Wales, he evidently discovered, as many of us do when we travel to foreign shores, that the holy places and the tombs of the saints often provide “a location for the healing, forgiving, and guiding powers of God.”

"Pilgrimage is one of the oldest spiritual traditions, shared by all the great religions of the world. The practice of pilgrimage has been a part of Christian spirituality since the first apostles, after the death of Jesus, returned to those places in Galilee associated with his memory and learned, as they fished and ate meals together on the seashore, that he was still very much alive. While pilgrimages may result in encounters with the Holy One, they can also be painful journeys into the unknown, far from family and friends and all those things that give us a sense of self–worth and identity. This experience of being in the wilderness, of being betwixt and between, is described by Joseph Campbell as characteristic of “liminality,” a state in which the person striving for maturity and wisdom crosses a threshold into the unknown, meets many obstacles as well as helping spirits along the way, and returns home as “master of two worlds” with a “treasure” or “blessing” that is shared with the community. According to Campbell, all the great myths of humankind have these elements describing how a person becomes a hero, which is to say, more fully human (and, from the Christian perspective, more god–like). Victor and Edith Turner, authors of Image and Pilgrimage in Christian Culture, describe pilgrimage in those terms: as a “liminoid phenomenon,” a boundary experience that applies not only to foreign travel and rites of passage, but “to all phases of decisive cultural change.” “It has become clear to us,” they say, “that liminality is not only transition but also potentiality, not only ‘going to be’ but also ‘what may be.’

"With that understanding in mind, let us take a pilgrimage to Celtic lands and to the home of Brigit, who was considered the patron saint of travelers and pilgrims during the Middle Ages. As a soul friend with whom that ancient tradition of spiritual guidance is very much identified, she has something to teach us about women’s leadership as it emerged in the early Celtic Church. Her legends and stories also reveal much about the actuality and potentiality of women’s spiritual power in our own churches today. Brigit, the powerful Christian saint associated with a Celtic goddess, is a study in liminality, for she lives on the boundary between pagan mythology and Christian spirituality, between what was and what will be. Described in one of the most ancient Christian Celtic hymns as “ever excellent woman, golden sparkling flame,” and by the Irish poet Padraic Colum as “she who had the flaming heart,” Brigit will show us that not only is her monastery associated with flames of fire, but her life and ministry as well—a flame of holiness that continues to blaze and give us light even though the fires at Kildare of which Gerald of Wales wrote have now been extinguished."


For those who have the original version of Wisdom of the Saints and would like the updated introduction, this is available through Northumbria Community for four pounds. For an online article by Sellner on soul friendship (anam cara) visit the site of Aisling magazine.
Posted by Mael Brigde at 5:36 pm