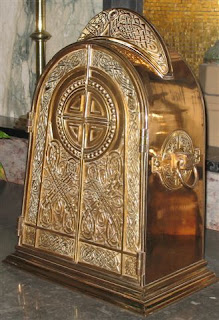 St. Brigid's skull has done some travelling, apparently. This may be appropriate for a woman who travelled widely when she was alive, visiting many areas in Ireland and, according to legend, establishing a number of religious communities.

Say the writers at Orthodoxwiki:
"She died at Kildare around 525 and was buried in a tomb before the high altar of her abbey church. After some time her remains were exhumed and translated to Downpatrick to rest with the two other patron saints of Ireland, St. Patrick of Ireland and St. Columba of Iona. Her skull was extracted and brought to Lisbon, Portugal, by two Irish noblemen, where it remains."

But in fact, if this is indeed her skull, not all of it remains there. Wikipedia informs us that a "fragment of this skull was brought to St Bridget’s Church, Kilcurry in 1905 by Sister Mary Agnes of the Dundalk Convent of Mercy." The website of St. Brigid's Parish of Killester, Dublin tells of a portion of St. Brigid's cheekbone that is housed there:

"In 1929 a small portion of St. Brigid’s skull was brought back to Ireland and placed here for the veneration of the people. At the time it came as a great surprise to the majority of Irish people that this relic existed, and that it had been carefully preserved in Portugal, where for hundreds of years the Portuguese had almost made St. Brigid their own.


"The Holy Relic is preserved in an unpretentious church in Lumiar, a small town outside Lisbon. King Dinis had a small convent of Cistercians founded there during his reign, at a place called Odivelas, a few miles outside Lisbon and quite near Luimar.

"In 1276 the Bishop of Lisbon decided to build a church at Luimar and he placed it under the patronage of the nuns at Odivilelas. When King Dinis heard that three Irish knights were bringing St. Brigid’s head to Portugal, he wanted to have it preserved in the convent of Odivelas, but Divine Will decreed otherwise; it was placed in the church at Lumiar, where it remains to this day.

"The three faithful knights remained with the Holy Relic for the rest of their days, and when they died they were interred in tombs let into the wall of St. Brigid’s chapel.
The inscription reads:

Here in these three tombs lie the three Irish knights who brought the head of St. Brigid, Virgin, a native of Ireland, whose relic is preserved in this chapel. In memory of which, the officials of the Table of the same Saint caused this to be done in January A.D. 1283

"A portion of the skull was given to the Rev. Father Traynor of Killester, under seal of the Cardinal of Lisbon, on November 16th 1928 for Killester Church. The Archbishop of Dublin approved it on November 26th 1928, and on Sunday 27th 1929, the solemn ceremony of translation took place."

In January 2012 the relic was removed from the reliquary, which was undergoing maintenance, and locked away in preparation for St. Brigid's Day ceremonies. The reliquary was subsequently stolen; it is only by chance that the relic itself remained at Killester for the faithful.

A short video on YouTube takes us to the chapel in Portugal which houses the larger portion of the skull attributed to St. Brigid.