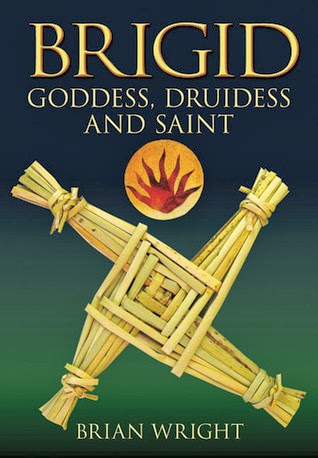 Saint Brigid of Kildare is considered one of Ireland’s foremost saints of the early Christian period, along with Saint Patrick and Saint Columba. Her floruit was supposedly the late fifth century to the early sixth century and she is credited with the foundation of a major monastic community of both monks and nuns at Kildare. Her cult spread from Ireland into Wales, Scotland, England, and the Continent, and continues to the present day. Her hagiographical tradition is extensive, with her earliest Life dating from the mid-seventh century. Her folkloric tradition is even more extensive: on her feast day, 1 February, she is celebrated with special rituals and customs; several holy wells have been dedicated to her; in the Hebrides, she has been associated with the Virgin Mary—as her midwife, no less; and she has been closely identified in the modern era with a pagan Irish deity of the same name, to the extent that many people believe that she is the goddess Christianised. A book that draws together her early and later traditions, and examines the popular folklore surrounding her, ought to be welcomed—but, unfortunately, not this book.

Brian Wright does draw together Brigid’s early traditions in his first few chapters, beginning with a discussion of the origins of the goddess Brigantia who became venerated as “Brighid” (sic) in Ireland, thanks to the druids (according to him). Brigid the saint, he believes, was a druidess who converted to Christianity and, with her fellow druids and druidesses, founded the monastery of Kildare. Alas, there is no evidence whatsoever for this. Wright offers a potted history of pre-Christian and early Christian Ireland that takes theories for fact and makes use of sources in an uncritical way. His account of the goddess Brighid, about whom he admits few tales exist, is devised in a similar fashion, where he synthesises several discrete strands of mythological lore and speculative ideas.

When it comes to relating the customs and traditions connected to Saint Brigid, Wright proceeds from the firm conviction that many of these stem from the pre-Christian beliefs and lore surrounding the goddess; most of the miracles of Saint Brigid, including the multiplication of food and drink and control of the weather, are, according to him, survivals of the deeds of the pagan goddess. He does not take into consideration the miracles of Christ (except once, on page 235, where the hagiographer himself does it), although he does allow that her early hagiographers adapted these deeds for a Christian moral purpose. ButWright’s purpose is not to examine these tales, customs, and beliefs in any scholarly way; this is meant as popular book for a non-academic audience. There are no references to his sources in either footnotes or endnotes. Translations of hymns, prayers, and saints’ lives go unacknowledged. This, however, is a disservice to his readers, academic and non-academic alike, both of whom might like to follow up his sources. Although he provides a list of Further Reading, this is a jumble of the scholarly and nonscholarly, and a mess in terms of citation; journal articles are cited as if they were books, and one item is, in fact, cited twice, owing it seems to some confusion over the authors’ names (Amber, K and Azreal Arynn K or K, Amber and K, Arynn—which is it?).

Wright does actually provide some extensive compilations of folk customs and traditions surrounding Brigid, including Saint Brigid’s Day celebrations. However, his account is no substitute for Séamus Ó Cathaín’s The Festival of Brigit: Celtic Goddess and Holy Woman (1995). On the other hand, Wright does tell his readers how to make a Saint Brigid’s cross in Chapter Seven, “Celebrating the Goddess-Saint in Ireland,” and Chapters Eight and Nine contain a compendium of Brigid’s traditions in Scotland, Wales, and the Isle of Man. Chapter Eleven, on holy wells, also brings together several of Brigid’s folk customs and beliefs associated with wells, although Wright does not consider the possibility that not all wells dedicated to Saint Brigid may have been pre-Christian sites of worship. It is simply assumed as a fact.Wright is billed as a teacher of folklore and British mythology in Somerset and Devon, and his local interests are evident in his chapter on the tradition of Brigid’s association with Glastonbury (Chapter  Ten). In his final chapter, he lists some of the modern manifestations of the veneration of the “goddess-saint” and ends with a brief advertisement for the Friends of Bride Mound at Glastonbury.

Had he stuck with simply bringing together the modern folk customs and beliefs of Saint Brigid—and had he offered proper references—Wright might have produced a book both interesting and useful. As it is, this book is seriously limited in value. It is also very poorly written. Individual chapters are badly organised internally, and the entire text is riddled with grammatical errors (sentence fragments abound) and mistakes in spelling and punctuation. For example, a common and consistent error is the use and misuse of the apostrophe (“it’s” for “its,” and vice versa); these and mistakes like “Keeting” instead of “Keating” (p. 70), “formerly” for “formally” (p. 135), and   “Cannon” for “Canon” (p. 189), to name but a few, suggest that no human copy-editor laid eyes on the manuscript prior to publication. Yet the material quality of the publication is high: it is printed on good, heavy paper; the photographs and line drawings are well reproduced; and the front and back covers are colourful and eye-catching. But priced at £18.99, this is asking too much for what it is. The content just does not live up to the packaging.