Review: Legacy of Druids - Conversations with Druid leaders of Britain, the USA and Canada, past and present by Ellen Evert Hopman 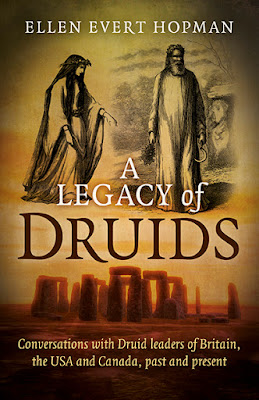 Full disclosure: I was, to my amazement then and now, interviewed for this book. That is not why I like it, though I confess it is why I wanted to read it in the first place.

Why Review Legacy of Druids on Brigit’s Sparkling Flame?
I wouldn’t normally review a book like this on BSF as it isn’t actually about Brigit. However, there are two reasons to:

2) More generally, it is fascinating from a historical perspective for Neo-Pagans generally, particularly but not exclusively those who identify as Druids or follow a Celtic-based path. Many Brigidines of course are in that number.

It is a little weird reading the me of twenty-odd years ago. I notice I have mellowed. I want to correct two things I said in the book, and then I can forget me for the rest of this review:

1) I was not able to carry through with my intention (a mere year ago) to stop producing the Daughters of the Flame newsletter. It is too central to the group. On, in less labour-intensive form, it goes.

2) I say at one point, “On the way to the monastery I passed a high school called Saint Brigit's. I had been into a couple of churches with shrines to St. Brigit, in Melbourne and elsewhere, and I found myself praying to Her as Goddess more pointedly than I had in the past. When I passed the school I said to my companion that I wondered what the students would think if they knew their school was named after a Pagan Goddess? (pg 32)”

I no longer think that is a fair question. Though Brigit to me, and to most NeoPagans, is a goddess as well as a saint, I believe now that historically this was not likely the case, that it is a much more recent fusion. I won’t get into the argument for that here, just say that I would not ask that question in the same way, now.

Brigit in Legacy of Druids
Apart from my interview (pg 29-39), Brigit is mentioned a couple of times by other interviewees. Lady Olivia Roberston has an amusing reference to the “silliest poem” used by Ross Nicholls (progenitor of the Order of Bards Ovates and Druids) in honour of Brigit in his early Imbolc rituals.

“It rather went like this ... ‘Ah, sure now, we invoke the golden-haired blue-eyed Brighid, the sweet Brighid who gives us the good cow’s milk.’ This ghastly image ... ”
Pg. 51

On to the Main Review!

Synopsis: A thoughtful, chatty book—reading it is like visiting, mead in hand and cross-legged on the forest floor, or sipping tea and nibbling dainties in an overstuffed chair, one fascinating person after another as they reflect, through their spiritual history, opinion, and advice, an exciting time in the evolution of modern Druidry and Celtic Neo-Paganism. Far from giving a single self-praising paean, the subject is pondered with care, scepticism, and occasional grumpiness from a multitude of viewpoints.

Druidism is a way of life. For some it is a religion. But either way, it is a belief system that honors the natural world in its many manifestations, a system that can work with other religious beliefs or stand just as well on its own ... No one’s perception of it is quite the same.
TopazOwl (pg. 102)

The interviews for Legacy of Druids were done twenty and more years ago, in pubs, at gatherings, through letters and email. One might expect they would be a little stale after so long, perhaps no longer relevant, but this isn’t so. Indeed, with updated information tucked around the interviews where needed, they are an absorbing read, all the more so with the advantage of hindsight. They are fuelled by stories of each subject’s spiritual path, their vision and practice, their concerns and hopes for the movement, and by their diverse perceptions of the history and meaning of Druidry. Hopman, herself a modern Druid, and therefore versed in much of the history and many of the issues of the movement, asks brief, broad questions and allows the interviewee to take flight.

The text is broken into four sections: “Druidry of the Spirit”, “Druidry and Politics”, “Scholars and Writers”, and “Musicians, Artists and Poets”, with introductory materials by Hopman, John Matthews (1996), and Philip Carr-Gomm (2015). Carr-Gomm’s “Failed Predictions, Hopes and Fears” and “The Core Issues”  give a useful overview for those (like me) who are not intimately acquainted with modern Druidry. Some of his comments seem a touch anti-Celtic Reconstructionist, which is unfortunate, but this is not a theme of the book.

Elsewhere, Ronald Hutton gives a comparison of UK and American NeoPaganism, and, in greater detail, of British Druids and Wiccans, including in his observations the “interesting ironies”—or inconsistencies—found in each path.

Erynn Rowan Laurie covers a lot of ground in her interview, offering many elements of belief and practice gleaned from the study of the ancient Celts which can be employed in our own practice. Although she is in the “Scholars and Writers” section, her views on the spiritual and social practice of poetry, her call to live out Celtic values like strength, honesty, and strong community relationships, and her final behest that we “Pursue the Salmon of Wisdom” (pg 215) struck strong chords in me in terms of my own spiritual practice.

Idealism, hope, humour, and contemplation fill the book. I think the greatest value for me is the opportunity to see the unfolding of each individual’s spiritual path—the seeds in their young lives that led them to grow in the ways they have, and the fruits that are born of those seeds. The unselfconscious innocence of these stories is moving and often inspiring. It is fascinating to peek into the heads of such a broad array of practitioners, from the most practical to the utterly fey, to learn what they are reacting to both in the greater world and within modern Druidry and NeoPaganism, and how they and their companions have helped to shape those paths. The unique voice of each subject, expressing their intentions, their paths, how they have structured their groups and why, kept me absorbed long after I had intended to stop reading each night. They base there practice on received spirit communications, on meditations and dreams, on the teachings of friends and family, on knuckle-biting scholarly research, or on a combination of these. Some don’t identify strictly as druids, but follow a Celtic-inspired path. Portrayals of meetings between modern Druids and Catholics, of Druid groups splitting off from or working together with others, and so on lend the juice of gossip to the mix.

I am intrigued, too, to see how various practitioners conceive of the history and meaning of Druidry, and what they choose to focus on within that understanding. Some of the ideas of ancient times and lineages read like wholecloth pseudo-history, where other histories seem grounded to greater and lesser degrees in evidence-based scholarship. I can’t help squirming when I read occasional assertions of what long dead people believed and how they behaved when I am pretty sure we can’t possibly know. But of course it’s not the purpose of this book to define for the reader the True History of Druidism. It is to learn the beliefs of modern Druids, and their views of their history are as individual and informative as their religious beliefs.

Just as definitons of Druidry vary, ideas of who is a Celt, or who is entitled to follow such a path, are disparate. For instance, Kaledon Naddair in his rough and righteous rant warns against the misguided appropriation of Celtic culture: “ ... the only people that have an automatic entitlement to the riches of the Keltic cultural tradition are Kelts! Kelts by race, birth, language and cultural upbringing in Keltic homelands! (pg 198)” Equally firm about the need to steer away from cultural appropriation and support the struggles of Celtic peoples is Erynn Rowan Laurie. “Respect for modern Celtic communities and languages [is] essential. The Celtic people are still under siege in all their remaining lands. Languages are dying, as are traditional practices, songs and stories. Going about trying to recreate something 2000 years old while ignoring the plight of those people’s descendants is nothing short of arrogant and disrespectful (pg 204)”.  However, her view of who might legitimately follow a Celtic Pagan path differs from Naddair. “I think that inclusiveness is important. We can’t rely on genealogy or geography to determine who is ‘Celtic’. The historical Celts roamed all over Europe, and lands beyond. Anyone worthy might be taken into the tribe through marriage or adoption (pg 205)”.

In the end, I’m not sure what percentage of what is represented here is very closely linked to the ancient Celtic world-view—or what little we actually understand of it—though of course this varies from interview to interview. But what it does undoubtedly contain is a modern world-view that is lively, thoughtful, and filled with insights, which does indeed have elements of the ancestors’s ways, or at the very least a reverence for those ancestors, a reverence for the earth we are born of, and a joie de vivre that must ensure its continuation into the future. How we may see modern Druidry in another twenty years is a tantalizing question indeed.

Summary
I am delighted to have read this book. It is interesting, it is useful, and it helps to set a framework to our endeavours and remind us of what we are as Celtic-inspired NeoPagans: what we aspire to, what our responsibility is to ourselves and to our world. If our practice as NeoPagans of any stripe does what so many of these practitioners are in part attempting to do—change our relationship to self and others and shift our impact on the earth and her children for the better—then it is far more than a self-rooted exercise, however pleasant or helpful, it is a gift of healing to the world. For it to be such, we need to live up to the ideals we put forward in interviews like these, and leave factionalism and self-interest behind.