Review of River Magic by M. A. Phillips, book one of The Rituals of Rock Bay 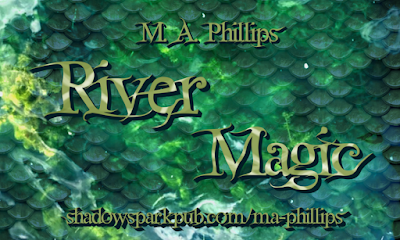 Review of River Magic by M. A. Phillips, book one of The Rituals of Rock Bay (2020) Shadow Spark Publishing

I want to say right from the start that I really like this book. It has a kind of ebullience and innocence about it that is really charming. The protagonist, though imperfect, as we all must be, has an integrity that guides her actions, and a passion for life that goes beyond herself and her friends, to the beings, sometimes familiar, sometimes frightening, that dwell in the world around her. It also deals with something I haven’t seen represented much in fiction: The coming of age of a modern Neo-Pagan woman.

Lacey Moran has explored Paganism with her friend Lidia since their school days, but she hasn’t really found her spiritual home. When Lidia opens a metaphysical store in their village of Rock Bay (situated along the beautiful Saint Lawrence River – a visit there is now on my bucket list), a group of modern Druids book the space for their Imbolc ritual. This ritual introduces Lacey to the goddess Brigit, and a connection is made immediately. (Hurrah! This is why I decided to read and review this book.)

Lacey has also had cryptic dreams of a mermaid in the river. Coming from a family with a talent for premonition, Lacey knows that many of her dreams foreshadow events to come. Do these?

Now, I have completely left out the other main theme of this book: the love that Lacey has for her longtime friend, Cian, and her conflicting feelings about becoming romantically involved with him. Cian is a feature of these dreams, making them more concerning to her. What do they mean?

I suppose this is a romance novel. I don’t read many such, so I won’t claim to be an expert in the genre. So, I can’t say for sure if River Magic would fall into that camp. The relationship is of great importance, but so is Lacey’s growth in her spiritual path, and in her chosen community. Important, as well, is protection of the land.

There are always difficulties along the path to love, in literature as in life, moments where everything seems possible, moments where nothing seems possible, and River Magic has all of these. But for me the most interesting part is the way the characters and their home town come to life, the obvious affection that the author has for both the characters and their setting, and how these relationships built on compassion, trust, and yes, integrity, move the action of the book.

I like the way Phillips approaches magic and religion and rituals. This is a novel about ordinary people having ordinary lives that are supported by their relationships with the deities. In other words, they are people like you and me, although a lot younger than I am, who go along living their lives to the best of their abilities. But although it isn’t a novel of Harry Potter-style magic, the deities are real, as is the mermaid, and this is gratifying to me. It just occurred to me that the only books I’ve read that have in this respect a similar sensibility are a couple of Christian romances I read years ago. Phillips’ book shares with those novels the sense of human relationships supported by their spiritual beliefs and the forces behind those beliefs, the gods, the goddesses, the spirits. And that can be powerful stuff.

Of course, the reason I am even reviewing this book is because of the presence of the goddess Brigit. So how do I like the way she is portrayed?

I quite like the tentative awareness that Lacey has of Brigit. She’s not the main focus of the story and yet her presence feels important even before she really manifests. I recognise the slow acquaintance with her that happened, though differently, in my own life. There is that first awareness, and then a whole bunch of life, and another moment of recognition, a desire to know more, and a whole lot of life happening all around that. Brigit herself doesn’t really engage in terms of holding conversations with Lacey, but she’s clearly aware of her and connecting with her.

It is really lovely to read a book about a devotee of Brigit who I could meet today, especially if I travelled over to the St. Lawrence and joined her in her small and lovely town. (Phillips clearly appreciates this piece of the world very much.)  When we first meet her, of course, Lacey is not her devotee, but it doesn’t take long before she begins to be drawn to Brigit. What I like especially is that her relationship with Brigit is not written like a fantasy. I’ve met many people who have been drawn to her and who work with her in similar ways. For instance, when Lacey is about to go into a stressful situation, she asks Brigit to lend her eloquence to help her through. Phillips doesn’t point out that this is because Brigit is a patron of poets, but if you remember that from earlier then you will understand why she made this particular prayer.  Her prayers are simple and plain and straight to the point, and they come to Lacey, herself a budding poet, whenever the need is there.

Now for the nitpicks.

The editor in me wished on a great number of occasions that I could scratch out a word or phrase and work with the author to find another way to say it. Words like smirk and gush, gasp and squeal, and so on got in the way for me because they frequently weren’t right for the situation they were describing; they were too much. her Ordinarily they might have put me off the book. I’m glad they didn’t. Phillips’ ability to tell a captivating story is already strong, and many of her similes and metaphors, turns of phrase and insights into a character or the language are surprising and fresh, and show a real ability that can only develop over time.

In fact, it may be her willingness to play with language that both leads her into trouble and allows that fresh and surprising imagery to emerge. Let me give an example that I think doesn’t work, and follow it with one that does.

He scoffed. ‘An interesting way to describe my anxiety.’”

“North Country winters tend to drag on through April. Fickle Mother Nature will cozy up, slap on a mud mask, bathe, then wrap herself in a thin robe of frost regardless of human calendars. Icy portraits still appeared on car windows some mornings, and Lacey begrudgingly scraped her windshield beside Cian before they went their separate ways.”

Now, the first one is not egregious by any means. Having Lacey hum her words is inventive, but it’s also a slightly weird word choice, and it catches me. I tried quickly to imagine her humming her words and it just doesn’t work. Having Cian scoff also catches my attention in a way it really shouldn’t. It throws me back to the tropes of melodrama. And this is the problem with a number of her word choices, they have the right dictionary meaning, but they are normally used in a different way, or even if not normally, enough so that they can trip the reader’s imagination up, distracting her into pondering the word choice instead of paying attention to the story itself.

In the second quote, Phillips is using her inventiveness successfully, as she does many times throughout the book. What I get tripped up by elsewhere is just a slightly awkward use of the same wonderful imagination that brings the story alive. In other words, I don’t see these quotes as failure versus success, I see a talent that is in the process of being strengthened. I think that, in time, M.A. Phillips will be an excellent writer indeed.

Allow me to give two more examples.

“…the Adirondacks were equally stirring. The ancient mountains swept her further and further from the road – a road that would drag her back to loans and demanding schedules. Here she was one among the many organisms clinging to Mother Earth as they tumbled through the solar system. Here she was closer to the stars.”

This first one doesn’t work for me. It isn’t bad, but I can see what Phillips is trying to make me understand, and the words don’t do it for me. The first phrase isn’t pretty, it is awkward. But she is dancing – I want to see the beauty of the act, even if she isn’t the best dancer in the world (and it would be more to my taste if she isn’t). Words like circumnavigated exactly describe what is happening, but in an unemotional and distant way that doesn’t bring us into the person being described. Saying she is confident is also remote. I want Phillips to show it in her dance.

In the second quote, although more words are used and many more concepts are involved (a recipe, at times, for overdoing things in writing), the writing is tight, and I feel along with the protagonist what she is experiencing.

I notice, also, that the two randomly chosen quotes that I think work well concern Lacey’s relationship to the land. It would be interesting to see if this occurs throughout the book – if it is this theme where Phillips finds her greatest strength.

This would be a great book to give to a fiction reader, especially a young one, who is just beginning to explore paganism or witchcraft. It’s a lovely, gentle primer at the same time as being an engaging story.

So, was this first novel perfect? No. Was it good enough to make me want to read Book Two? Oh, yes. I want to know more about Lacey, her friends, and the supernatural beings that people their world. And I want to watch M. A. Phillips develop in her craft. There is much to look forward to here.