I was invited today to a small gathering at the Listening Post in the Downtown Eastside of Vancouver, a drop-in centre where the people of Canada's poorest (and one of its most drug-riddled) neighbourhoods may walk in and sit in quiet, pray if that is what they want to do, meditate, sleep, or find a willing ear if they want to talk. I have used the facility myself and been very grateful to have it.

Today's gathering was different. I was there with about ten other people for a Roman Catholic Womanpriest led mass, officiated by Rev. Dr. Victoria (Vikki) Marie for the Our Lady of Guadalupe Tonantzin Community.

I was impressed. I am no longer a Christian myself, but I was raised Catholic and anyone who has read this blog can see that I retain an emotional attachment to elements of that faith and community. The people I met today were warm and welcoming, the service utterly inclusive and though focussed on the spirit, had a firm foundation in social justice for everyone.

Of course, I have heard of the ordained Roman Catholic women priests who endure excommunication to follow their calling, but this was the first chance I had to see one in action, and if I still swung that way I would certainly become a regular attendee.

I was pleased therefore to come home and learn from their website that in Calgary, a few mountain chains away from Vancouver at the edge of the Canadian prairie, another RCWP community has claimed St Brigit as their patron. Here is a little about them. Er, I should mention that Father is not actually what you call Monica. It's just the word that pops still to mind when I consider a Catholic priest. 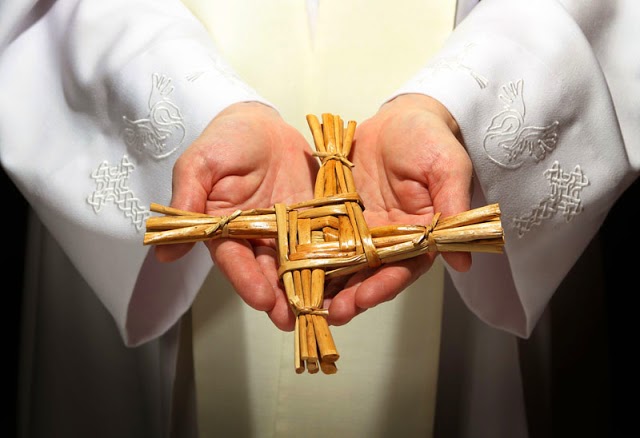 The Saint Brigid of Kildare Catholic Faith Community provides Christian ministry to individuals, families and society in solidarity with the guidance and prophetic vision of the international Roman Catholic Womenpriests movement. We are rooted in the the life-giving aspects of the Roman Catholic sacramental tradition, while maintaining a commitment to ecumenical sharing, spiritual openness and interfaith dialogue.

We are inspired by the women and men who lived with Jesus. These were people who listened with their hearts to Jesus’ message and who gave witness to the transformative power of his intimate relationship with God. Jesus’ earliest disciples responded with their whole selves to his call for compassionate action. This is our model for ministry. As a community, we celebrate, share and rejoice in the love that God our Creator offers us as we break bread together and strive to become a centre of love, hope and service for one another and the wider world.

All people who wish to join us are welcome in our community and at the Eucharistic table. 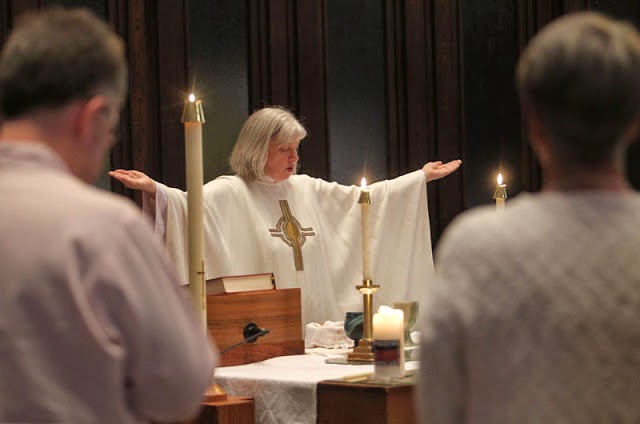 Our Priest and Celebrant

My vocation to the priesthood emerged out of my professional ministry and theological studies, my concern for social and gender justice issues, and my love for the church and the Roman Catholic sacramental tradition. My conviction is that people of both sexes and of all ages, regardless of marital status or sexual orientation, should have the freedom to explore and offer their God-given gifts within the contexts of church and community, and know themselves as beloveds of God. Personally and professionally, I am committed to creative work in the intersections of spirituality, liturgy and the arts. My dream is for the Saint Brigid of Kildare Catholic Faith Community to be a vibrant centre of worship, ministry, friendship and compassionate action...

Brigid of the Mantle, encompass us,
Lady of the Lambs, protect us,
Keeper of the Hearth, kindle us.
Beneath your mantle, gather us,
And restore us to memory.
Mothers of our mother, Foremothers strong.
Guide our hands in yours,
Remind us how to kindle the hearth.
To keep it bright, to preserve the flame.
Your hands upon ours, Our hands within yours,
To kindle the light, Both day and night.
The Mantle of Brigid about us,
The Memory of Brigid within us,
The Protection of Brigid keeping us
From harm, from ignorance, from heartlessness.
This day and night,
From dawn till dark, From dark till dawn.

Corinne and Darrel Winter:
“St Brigid's Faith Community is inclusive, as at each mass Monica reminds us: "Everyone is welcome at the table." Decisions are democratically made; everyone's opinions and ideas are welcome and respected. An example would be how, through honest and direct conversation, we arrived at a decision, as a community, regarding our participation in the Swerve magazine article. (See link below.) We love the inclusive language within the liturgy, eg. using the Aramaic Lord's Prayer. We also like the way St. Brigid's embraces Celtic, cosmic and progressive concepts, merging the old and the new, and being unafraid to question and challenge unjust practices within the church.”

Genny Kilburn-Smith:
“St. Brigid's provides me with such a sense of belonging. I used to volunteer at other parishes but I never felt so much a part of the community as I do at St. Brigid's. I now feel the freedom to voice my opinion and be as involved as I like and am always acknowledged and appreciated...”

Maureen Bibby:
“I attend St. Brigid's out of a sense of needing to put my money where my mouth is, or at least my feet. There is no just reason why women cannot serve our faith communities as priests. We the people need to follow our consciences on this justice issue of women / married men currently not being allowed ordination by the Vatican.

“I treasure the courage of Monica to follow through with ordination and I stand with her and the members of this
community as witnesses to the change that will come in the greater church and has come in these pockets of prophetic obedience.”

Mary Anne:
“St Brigid's is a place where I can celebrate the expression of my faith and feel completely relaxed with who I am. I
am pleased that some others there have told me they are not Catholic, yet they feel they belong

Lois Perron:
“While broadening my understanding of the Catholic faith at a biblical theology course, my image of God was lifted out of the confines of patriarchal tradition to include the feminine and universal aspects of the Divine. It was then that I became aware of the ordination of women priests and was absolutely in awe of these women's strength of spirit and conviction to take this leap of faith, knowing that the hierarchy was not get prepared to accept their gifts and calling to ministry...”

Jenny Miler:
“...I can no longer bear that women are treated like second-class citizens and priests are not allowed to marry. The archaic birth control rules are ridiculous and very few Catholics adhere to them, except for the poor women in third world countries who are having too many children and getting aides. I tried to keep going to church but I would leave mass angry about some paternalistic words in a song or a ridiculous sermon about a passage in the bible in which the predominant role of women was prostitution. I had pretty well stopped going to church. I wanted to find a group that questioned what was happening in the Catholic Church instead of blindly following rules that do not make sense.

“Why should I have to leave the church like everyone else? Why shouldn’t the church grow and change like everything else does? I believe in Jesus and his teachings and Jesus did not treat women like second-class citizens. Jesus would have welcomed women priests...”

A woman's place is at the Altar

Published: Friday, April 13, 2012
Many of the members at Saint Brigid of Kildare Catholic Faith Community, as the congregation is called, cannot openly discuss their involvement with the community for fear of being ostracized by devout Catholic family members and friends, and potentially losing jobs if they work in a Roman Catholic institution.

The fear-based tribal mentality--"Who is in and who is out...who will be saved and who won't," says Kilburn Smith--is exactly what she wants to move away from in the Catholic Church. She hopes that, through having a welcoming and inclusive community at St. Brigid's, those people who left because they could no longer relate to the church might one day return.

The primary argument against Roman Catholic women priests is that, according to the Bible, Jesus chose 12 apostles--all men. But some counter that the apostles were never actually ordained priests and priesthood came much later (in the New Testament, Jesus is the only true priest), and that Mary Magdalene, the biblical figure who was the first to see Jesus post-resurrection, was the apostle to the apostles. As well, there are a number of other females in religious leadership roles, including the deacon Phoebe and the apostle Junia, mentioned throughout the New Testament.

"There is no evidence among critical scholars of the Bible that would suggest that women should not be in the ministries of the church," says Michael Duggan, a theology professor and chair of Catholic studies at St. Mary's University College in Calgary. In 1976, biblical experts made that point to the Vatican, bringing forth evidence showing there were no scriptural objections to the priestly ordination of women. Rome rejected their conclusion. Where it gets more complicated, says Duggan, is that the Vatican is not looking at scripture (a.k.a. the Bible) alone.

For Fr. Stefano Penna, vice-president of college advancement and development at Newman Theological College in Edmonton, it's a tradition that dates back 2,000 years. "Tradition is a different thing than passed-on education or knowledge because that is constantly augmented," says Penna. "Tradition means handing on faithfully that which [is] received from before. As a church, in this we are united in the ancient churches, the Orthodox Church, those who pay very close attention and are deeply respectful for our tradition. We do not feel ourselves able to welcome into ordained ministry, women."