Review by Peter Crawley: "Brigit" -- a Play by Tom Murphy

by Peter Crawley for the Irish Times


A prequel to his masterful Bailegangaire, Brigit fleshes out a complex family history, but Tom Murphy’s new play is a more vivid portrait of the artist 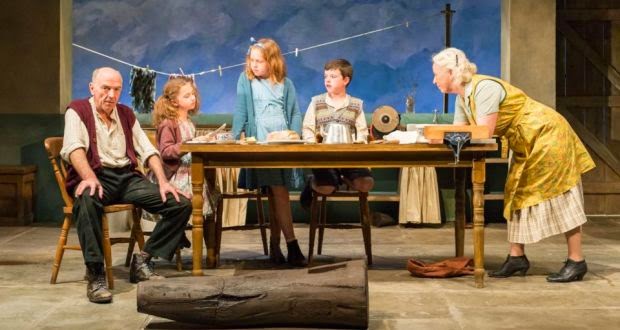 Brigit ‘is a sparing and episodic piece, fleshing out a complex family history,
but serving far more as a personal statement’
Brigit: Town Hall Theatre, Galway until Sep 21, then The Olympia Theatre Oct 1-5 2014.
It’s tempting to think that Brigit, a deeply personal new play from Tom Murphy, represents unfinished business for its writer. Written 30 years after Bailegangaire, and set 30 years earlier in 1950s Ireland, it is a sparing and episodic piece, fleshing out a complex family history, but serving far more as a personal statement. It could almost be a self-portrait.
When Seamus (Bosco Hogan), a temperamental handyman, reluctantly accepts a commission from the local church to carve a new statue of St Brigid, he takes his work home with him, engrossed in the pursuit to the exclusion of all else. His marriage to Mommo (Marie Mullen) is a war of attrition, measured in silences and pettiness: in the production’s opening moments he whips a pillow out from under her, a wickedly defining gesture in director Garry Hynes’ supple handling: quick as a blink, comic and heart-breaking.
“I’d like it to be perfect,” Seamus says of his statue, attempting to reconcile the earthy figure of Irish myth with prim demands for another plaster saint. “I’d like it to be what I feel. And I don’t know what that is.” This is a modest craftsman, not a sculptor, but Seamus’s absorption, frustration, callousness and vulnerability mark him out as a portrait of the artist as a driven obsessive. The casting of Hogan in the role – attractively weathered and spry, cerebral and dry – suggests that any resemblance to Murphy himself is entirely intentional.
A remarkably unembellished, absorbing work, Brigit progresses in a sequence of short episodes that Hynes allows to melt into one another, aided by the merging spaces of Francis O’Connor’s set and Rick Fisher’s gently ushering lights. It makes for an almost ritualistic rhythm. Where Bailegangaire folds folktale into reality, Brigit seems to chisel these lives into something mythic: the text is full of mantra-like repetitions (“Can you trust them?”; “You can’t tell me what she looked like.”), threaded through with Mommo’s recitation of Brigid’s legend, a goddess named Brigit demoted to a saint named Brigid.
Like the statue, ingeniously designed by O’Connor (and realised by Marcus Molloy) to emerge slowly from a rich piece of bog oak, the play is unvarnished in its depiction of creativity and its consequence. Like Brecht’s Galileo, Seamus conducts unintimidated business with the church, sparring with Marty Rea’s excellent priest, a puff-cheeked conciliator, and negotiating matters aesthetic and financial with Jane Brennan’s amusingly frowning Reverend Mother, whose haggling concludes, wonderfully: “But don’t expect to be remembered in our prayers.”
In the background, you see Mullen’s Mommo humiliated and hardening, the children adored and admonished, while lines echo from one play to the other. Yet it is the artistic pursuit that dominates. “Is nothing sacred to you?” shouts Seamus, when asked for adjustments, and the sentiment slyly holds up art as another kind of religion: a practice of belief and devotion, desire and suffering, to reflect of the world not as we would like it to be, but as it truly is.
Tom Murphy latest play, Brigit, was staged by Druid at the Dublin Theatre Festival with his earlier work Bailegangaire.
Posted by Mael Brigde at 1:54 pm