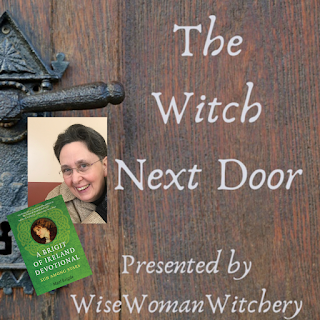 I had a great time talking with Emily Morrison of Wise Woman Witchery and The Witch Next Door podcast.

We laughed a lot — I worry I may have joked around too much — but also tackled serious topics, such as the origins of Saint Brigit, and differences and similarities between the goddess(es) and saint. I make a brave attempt to discuss the three goddesses Brig who are found in connection to the poet and historian Senchae, as well as the Brig who possesses the kings of the rams, oxen, and boars. Then we veered toward well- and flame-tending, my relationship with Brigit, the Daughters of the Flame, and briefly, my book, A Brigit of Ireland Devotional - Sun Among Stars.

I made a most regrettable mistake! I said no one else had been in Daughters of the Flame since the start but Brigit and me. Not true. Dear Erynn Rowan Laurie has, as well, and she has been a huge support to me in many ways. Like saying this flame-tending thing really did have value. (Did I ever need to hear that, a time or two.)

Honestly, though, I was not well when this interview took place and it does show. Yet at the same time, I felt at ease with the lovely woman I was talking with, making it a great pleasure to participate.