Boundaries Between Goddess and Saint: A Review of Miranda Green's "Celtic Goddesses"


This is a book I reviewed in A Long Sip at the Well, but this is a review I wrote the year the book came out, which I just stumbled across. Slightly longer than the other, it has a more "hands-on" perspective, too. So I offer it here.


Miranda Green, a senior lecturer in archaeology and early Celtic studies at the University of Wales and recipient of the National Library of Wales' John Legonna Celtic Research Prize in 1986, has a new book out called Celtic Goddesses: Warriors, Virgins and Mothers (1996).  The last chapter ends with a few pages on Brigit.  She discusses primarily the distinctions between and blending of the goddess and saint, and offers some interesting in sights. 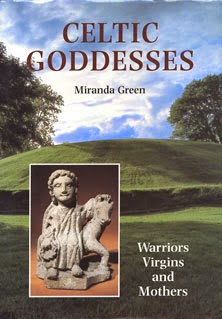 I'm pleased with some of the revelations because of their connections to my life.  As a goddess, Brigit acted as a mediator between the Tuatha De Danaan—the deities of Celtic Ireland—and the Fomorians—some of their greatest foes.  Her interest, despite being a tribal deity, was not only the winning of wars for one side or the other, but was "the future well-being or Ireland" (pg.198).  This makes her an especially good deity to turn to when mediating between warring aspects of the self or between individuals or groups that do not understand each other well.

A feature both goddess and saint shared was "liminality": being associated with boundaries, particularly between this world and the next.

“Brigit's liminal imagery is intense and manifests itself in various ways.  She belonged to both the pagan and Christian worlds; she was born at sunrise, her mother straddling a threshold at the precise time of her birth; one parent,her father  Dubthach, was of noble lineage, while her mother, Briocseth, was a slave. Brigit was nourished on the milk of an  Otherworld  cow... and this increases her  symbolism  as  a being linked to two worlds (pg. 199).”

This aspect is particularly enticing when thinking about making inner journeys such as meditation or trance-work, which involve moving from the mundane world to a world of symbolism and magic.  It suggests that performing such rituals on the day one is tending the flame could strengthen the crossing.  (See Circle of Stones, by Erynn Rowan Laurie.)

A thought-provoking passage refers to the paradox of Brigit's sacrifice of her own sexuality (in order, as a saint, to maintain autonomy and be able to do her life's work) and her deep connection to fertility and birth, her ability even to "cure frigidity in women" (pg. 200).  Although the text here seems to be referring both to goddess and saint, Green states elsewhere that the goddess was married to the Fomorian Bres, and I recall reading somewhere that the keen originated with Brigit, who used it in mourning her dead son (see Cath Maige Tuired, The Second Battle of Mag Tuired, translatedby Elizabeth A. Gray, paragraph 125) so it is possible that her fertility function carried over from her less virginal pagan state, although in another sense of the word "virgin"—an autonomous woman—she was always such.

Green offers another explanation. “The strength of Brigit's fertility-imagery is suggested by the medieval carvings of Sheela-na-gigs in Ireland, interpreted by some scholars as grotesque depictions of Brigit with the entrance to her womb wide-open, even though the saint was a virgin.  As we saw with some of the Welsh goddesses... it may be that it was because Brigit was sexually-intact that her fertile power was so concentrated (pg. 200).”

Sexually intact.  Interesting choice of words.  Because of course intactness denotes wholeness, completeness: an essential part of healthy sexuality.  The image that suddenly arises for me is of a very sexual, completely whole and autonomous woman, who may or may not have children, a spouse, a lover, but who certainly has her own sexuality, thank you very much.  The sheela-na-gig would suffice as a symbol for her, indeed.

A little disconcerting, as the organizer of the Daughters of the Flame, is Green's assertion that our belief that Brigid was a fire goddess is based on her saintly association with fire—a common association among Christian saints which symbolized their close connection to god.  She doesn't rule out that Brigit may have been a solar deity; a healthy dose of caution is advised.  She discusses the perpetual fire at Kildare—“a symbol of hearth and home but also of purity” (pg. 199), but does not assert that it originated with pre-Christian worshippers, although she does cite the argument of others that Brigit may be connected with Minerva, who did have a perpetual flame burned in her honour.  In citing it this way I get the impression she doesn't lean strongly in that direction herself, when weighing the evidence.  Yet earlier in the book she lists as one of "a few unequivocal references to priestesses attached to specific temples in early Celtic literature" the legend that the monastery at Kildare was built on the site of a pagan temple.  It was “apparently tended by women who kept vigil over a sacred fire which...was never allowed to go out” (pg. 143).

Be that as it may.  The intact picture of the goddess Brigid is long lost to us, and it's true that our vision of her is shaped not only by “Lives of the saints” written by Christian scholars over hundreds of years, but by our modern life and personal interpretation and experience of her.  As Green herself concedes, many of the elements of the saint's description and mythology seem lifted straight from Pagan symbolism and tradition, and it is possible that the picture we can glean of her from the “Lives” is an illumination more than a distortion, if we eliminate the purely Christian elements.  I'm not married to this idea, nor am I worried.  In the many centuries before Christianity she must have altered many times as cultures rubbed against each other and new meanings were absorbed into her cult.  If we are paganising a Christian ritual, or repaganizing a christianized Pagan ritual... It is a fair exchange, at the very least.