Brigit on the Burren: A Snippet from Lady Gregory

She Remembers the Poor
But if Brigit belonged to the east, it is not in the west she is forgotten, and the people of Burren and of Corcomruadh and Kinvara go every year to her blessed well that is near the sea, praying and remembering her. And in that well there is a little fish that is seen every seven years, and whoever sees that fish is cured of every disease. And there is a woman living yet that is poor and old and that saw that blessed fish, and this is the way she tells the story:

"I had a pearl in my eye one time, and I went to Saint Brigit's well on the cliffs. Scores of people there were in it, looking for cures, and some got them and some did not get them. And I went down the four steps to the well and I was looking into it, and I saw a little fish no longer than your finger coming from a stone under the water. Three spots it had on the one side and three on the other side, red spots and a little green with the red, and it was very civil coming hither to me and very pleasant wagging its tail. And it stopped and looked up at me and gave three wags of its back, and walked off again and went in under the stone.

"And I said to a woman that was near me that I saw the little fish, and she began to call out and to say there were many coming with cars and with horses for a month past and none of them saw it at all. And she proved me, asking had it spots, and I said it had, three on the one side and three on the other side. "That is it" she said. And within three days I had the sight of my eye again. It was surely Saint Brigit I saw that time; who else would it be? And you would know by the look of it that it was no common fish. Very civil it was, and nice and loughy, and no one else saw it at all. Did I say more prayers than the rest? Not a prayer. I was young in those days. I suppose she took a liking to me, maybe because of my name being Brigit the same as her own."

The Boy that dreamed he would get his Health
There was a beggar boy used to be in Burren, that was very simple like and had no health, and if he would walk as much as a few perches it is likely he would fall on the road. And he dreamed twice that he went to Saint Brigit's blessed well upon the cliffs and that he found his health there. So he set out to go to the well, and when he came to it he fell in and he was drowned. Very simple he was and innocent and without sin. It is likely it is in heaven he is at this time.

The Water of the Well

And there is a woman in Burren now is grateful to Saint Brigit, for "I brought my little girl that was not four years old" she says "to Saint Brigit's well on the cliffs, where she was ailing and pining away. I brought her as far as the doctors in Gort and they could do nothing for her and then I promised to go to Saint Brigit's well, and from the time I made that promise she got better. And I saw the little fish when I brought her there; and she grew to be as strong a girl as ever went to America. I made a promise to go to the well every year after that, and so I do, of a Garlic Sunday, that is the last Sunday in July. And I brought a bottle of water from it last year and it is as cold as amber yet." 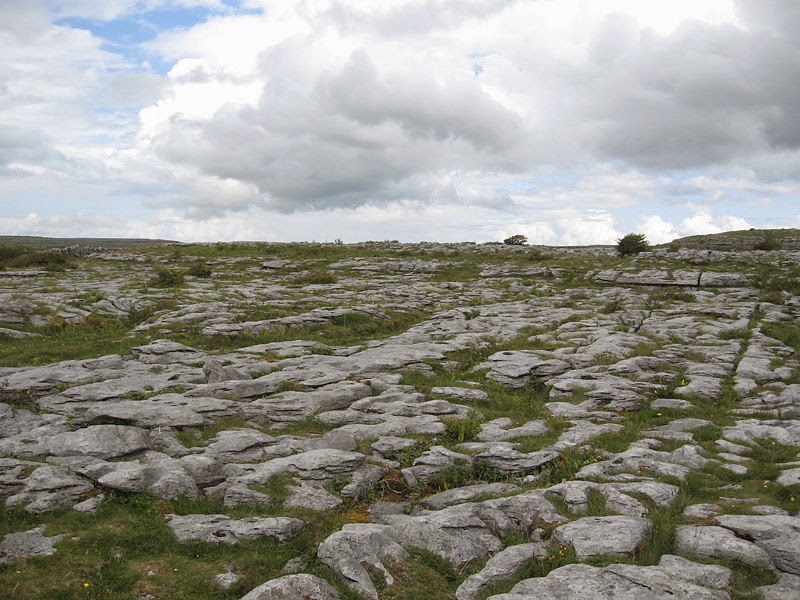 Email ThisBlogThis!Share to TwitterShare to FacebookShare to Pinterest
Labels: A Book of Saints and Wonders, Healing, Lady Gregory, The Burren