Brigit, it will come as no surprise to you, arises at least in part from Celtic culture, and some understanding of that culture is useful to those who are attracted to learning more about her. I stumbled across a site which has an interactive educational module on Celtic life, in particular Welsh, designed for youngsters. (Do we still use that word?) Not terribly young myself, I nevertheless enjoyed exploring the site.

Thanks to the BBC for this!

Posted by Mael Brigde at 3:21 pm No comments: 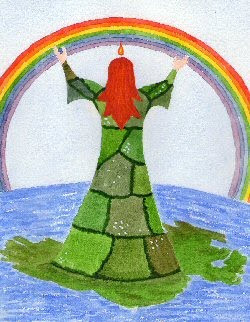 "From a young age Ceri Norman's love of mythology and history has inspired her. After gaining a degree studying History and English, Ceri worked in libraries and museums sharing this love with the people she met. Seeing the pleasure that books and history gave, Ceri started writing fiction that people of all ages could enjoy and relate to. As a deeply spiritual person she prefers her writing to have a spiritual and mystical flavour."

Ceri is the author of Celtic Maidens, "a powerful and supernatural tale of love, lives and obsession set against the dramatic scenery of the Welsh Mountains". She writes for various magazines and contributed to Holly Swann's booklet, "Brighid and Me", mentioned elsewhere in this blog.

The Brighid Oracle, by Ceri Norman

The Brighid Oracle by Ceri Norman will be released later this year by the Tarot Media Company.

The Brighid Oracle is a 33 card deck, with companion book, bringing the divine energy and wisdom of Brighid into daily life. Brighid is known to and loved by many people from a variety of backgrounds and paths as Celtic Goddess, Christian Saint, or Faerie Queen. The cards explore the mythical landscapes, sacred creatures, ancient rites, and rich treasures of creativity which Brighid provides. Many of Her myths and magical symbols are represented in the cards, such as Brighid's cross, swans, fire and Kildare.

I've been working with Brighid for many years and I am her Priestess, Flame Keeper and much more. I've not only written this Oracle for Brighid, I also had a go at illustrating it. Brighid is the light that guides my way in life, she is my guiding star . Brighid's inspiration is a constant source of strength and wisdom, and through this Oracle I share the experience of working with Brighid with others, to inspire them on their own path.

Whether you have a little bit of Irish in your genes, are fascinated by all things Celtic, or are looking to connect with a Goddess who will guide and inspire you, this Oracle has something that appeals to everyone.

The press release for The Brighid Oracle.

I will add more details to this page, such as the release date, as soon as I have more information.
Posted by Mael Brigde at 2:01 pm 3 comments: