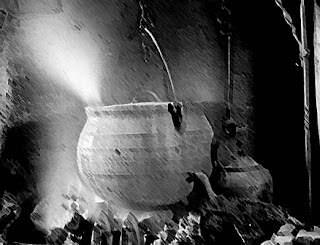 The end of February rolling round brought its sleety rain and slapping winds and Ev sat peeling the tips off her toenails with a knife, glad to be inside and all. She had a hot toddy sitting next to her and held three of her toes splayed in one hand while the other, careful with the knife, reached round and grabbed the handle of the mug for a sip. God and Mary, that was good, but. She might be stuck here in the bog with her mam clingin’ to the past, might have to fall out of bed every day and go to the barn to slog around ankle-deep in mud and shite, but when she was done she got to wash the country off and kick back.
As her gaze lifted from the soft steam rising off the cup she saw through the uncurtained window a fey light coming over the hill and she stopped moving, swallowed the mouthful of whiskey, and thought, “What the feck?”
Then her mam, in the next room, started blithering it was time to up and ready themselves for the Brídeog.
“Ah, well, she got here at last, did she?” Ev muttered to herself. She let her splayed foot drop and took a good snog off the toddy before picking herself up.
Meanwhile she leaned forward for a better look because whatever her personal feelings about the blessings of the house she did welcome the distraction. Masked, straw-clothed bogtrotters in old-fashioned dress, climbing over the hill with a great scanger of a saint stuck on the spindle of a butter churn, stuffed arms flopping as her bearers stumped along. And the night was up to ninety, anyway. Maybe she’d get to see one of them blown over the hill or something. But how in Jayzus did they keep the damn light going in that wind?

It was a long haul for Brigit, three plus weeks carried across the countryside in the company of these fine folk. They were a serious and steady sort, and she blessed each hearth and barn as much for the goodness in this lot’s heart as for the earnestness of the elderly who still remembered and welcomed her. But she was tired. Three long weeks since leaving the Sidhe, the Land of Youth where hunts and feasts and dances and love were endless and always new.
Every year she left the Sidhe to sanctify the land. She was carried in effigy to her people’s homes, where she blessed them and their livelihoods. She woke the seed of spring with her presence, bringing the people from the grasp of winter into a time of vivid life. Snowdrops nodded and leaftips pierced the stiff earth; milk let down in the kine’s udder, lambs strained for release from their mothers’ wombs.
Brigit looked out at this last stern and forbidding community at the bottom of this last hill, and breathed deeply to bear up under the weight of their misery. It was a hard thing being a poor farmer, that she knew, and she had pity for them. But it was a hard thing being their goddess, too—or to modern minds, their saint.
She hung on the spindle of a churn, occupying, spirit without flesh, the carefully manufactured Brídeog of straw and rags and handsewn cloth, her blue mantle whipping round her face and blanking out her view from time to time. There was nothing to be done about it. Enough to come with these people and bless their homes and crops. If she lifted a hand to brush the mantle from her eyes they’d all drop dead of fright. She held back and blinked through the thrashing cloth.
And what was that? Narrowing her gaze, she saw there the stare of a young townie leaning forward and peering out the window at her. Was that a smirk on the young woman’s face? Was it indeed?
Brigit was tired. And she was grumpy. And she didn’t like to be disbelieved out of a job. She ground her teeth.

The Brídeog by Casey Wolf is licensed under a Creative Commons Attribution-NonCommercial-NoDerivs 3.0 Unported License.

The hearth drawing used with the story is by E.E. Evans, and appeared on the cover of his book Irish Folk Ways (1957). The swans are by Maud Gonne (from Celtic Wonder Tales).