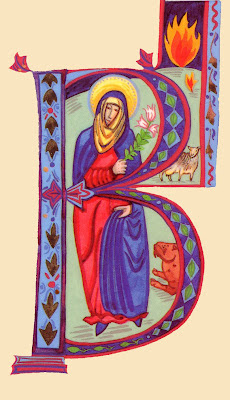 “Brigit, the Mary of the Gael”, from A Book of Saints and Wonders by Lady Gregory (1907) (Mention only.)
Saint Brigid of Ireland, Alice Curtayne (1954)
Saint Bride, Iain MacDonald (1992)
Power of Raven, Wisdom of Serpent, Noragh Jones (1994)
Rekindling the Flame: a Pilgrimage in the Footsteps of Brigid of Kildare, Rita Minehan CSB (1999) (Pilgrimage Guidebook; Guided Meditation)
The Life of Saint Brigid, Anna Egan Smucker (2007)

This is a surprisingly small sampling, but I like all of these books. If you could read only one I would recommend Curtayne. Unless of course your purpose was to hurriedly prepare for a pilgrimage to Kildare, in which case go with Rekindling the Flame. Oh, heck. They all have different aims, so any could be the one for you, depending on your needs.

Curtayne’s book, written in the early 1950s, is a detailed and broad-ranging introduction to the saint which has no time for the goddess, yet which deepens our understanding of Brigit on many levels. It is told from the perspective of a believing Catholic—ironically, a rare view in the current Brigidine literature, and therefore doubly valuable for the insight it provides. It is the first full book I read about Brigit and remains a favourite.

MacDonald’s highly portable text contains translations of a late (15th century) Life of Saint Brigit from the Book of Lismore and an unusual prayer sometimes credited to Saint Columba (among others): the 9th century “Hail Brigid”. Perfect for a quiet walk in the countryside, reflecting on the saint.

Jones looks at length and in an accessible style at the traditional roles and rituals of the Scottish countrywoman, and Brigit appears throughout.

Minehan, herself a Brigidine nun, has written a moving and informative pilgrims’ guide to the Brigidine sites of Kildare town and its environs.

Smucker has pieced together a small and lively (and beautifully illustrated) primer on Saint Brigit as told through the late (15th century) Life of Brigit from the Leabhar Breac and customs and prayers related to her.

I had hoped to include “Brigit, the Mary of the Gael”, from A Book of Saints and Wonders by Lady Gregory (1907). Unfortunately, the copy I borrowed from the Vancouver Public Library in the ‘80s appears to have been withdrawn from the collection, and I don’t have another copy near to hand. Hence only a brief mention below.