Caítlín shows beautifully how to gather your rushes, make, and trim your cross. (All to the tune of a penny whistle.)

There are gadjillions of videos on YouTube demonstrating how to make Brigit's cross, including this silent one by a faceless expert, and this by Una Casey of Faughart. (See previous post.) But despite the odd technical difficulty, I rather like this one.

Posted by Mael Brigde at 2:33 pm No comments:


At St. Brigit's Shrine in Faughart, Co. Louth, pilgrims have long come to pray the stations and tie up offerings of cloth in order to leave their troubles behind them. Blathnaid Ní Chofaigh of RTÉ explores the area to learn more about St. Brigit and her cult.

An impressive moment in the film is watching local woman, Una Casey, making a rush cross while chatting with Blathnaid--one strong enough to kick to Dundalk without it coming apart.

Una has been making Brigit's crosses since childhood, and gives workshops in the craft, above at the County Library, and also at the Brigit of Faughart Festival.

Posted by Mael Brigde at 4:29 pm No comments:

From aMUSine  "The museums, galleries and collections zine by interesting people for interested people: 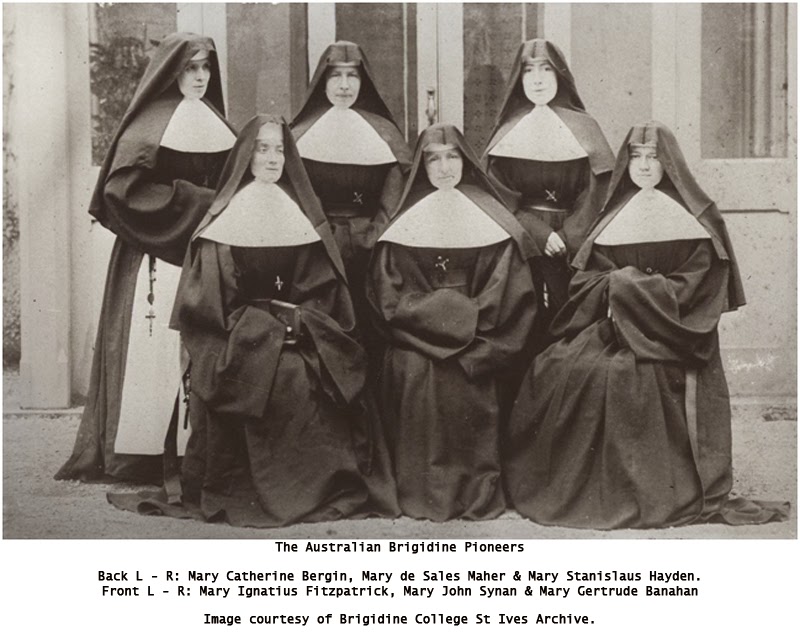 On April 16, 1883 six brave young Brigidine Nuns left their convent in Mountrath, Ireland to travel to Coonamble in New South Wales.  They were chosen from 17 volunteers at the convent to set up a catholic school at the request of Dr Murray the Bishop of the Maitland Diocese which included the Parish of Coonamble.  Their journey took just over 2 months, leaving London on April 20 on a small 5,000 tonnage ship ‘The Chimborazo’. They arrived in Melbourne for a short stay on June 3 after only two stops at Naples and Port Said. The Sisters continued on to Sydney then Newcastle by ship and finally reached their destination of Coonamble on June 21 after many days travelling overland by train and coach.
Coonamble was a small town of some 800 residents many of whom went out many miles to meet the nuns and lead them into town to the welcoming peals of the church bell.  A grand dinner was held and after grateful speeches the nuns could retire to their new home, the small four room presbytery.  The kitchen would serve as the refectory, community room and high school classroom while the primary school would be held in the humble slab church building. 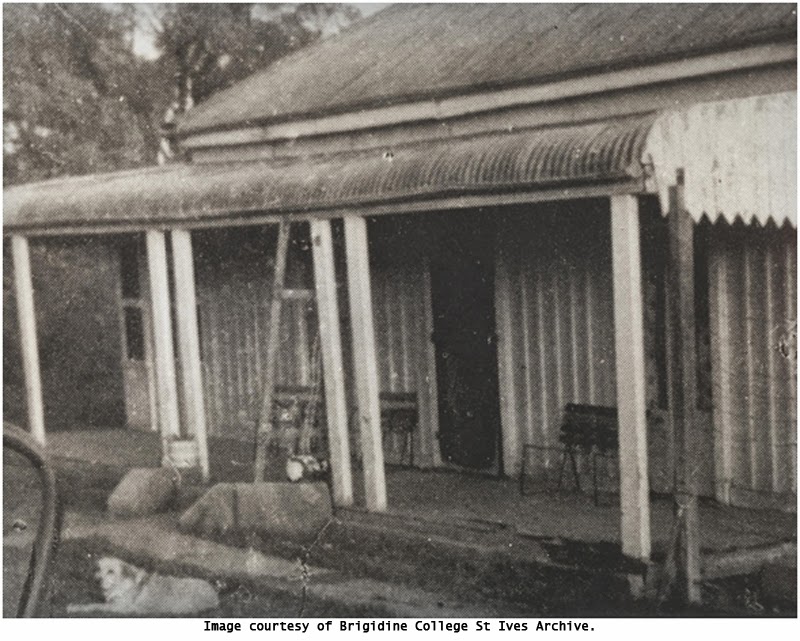 After the warm welcome the nuns set to work opening their school on July 9 and by the end of the year a wooden building was commenced which would house day students and boarders.  The reality of their situation would soon hit home as the long hot summer rolled around, water could only be bought by cask and lighting was by candle or kerosene lamp.  One sister wrote home, ‘the heat ranges from 110 to 117. Violent dust storms rage from 2 to 36 hours at a time….at times the dust clouds look like moving walls’.  The difference between their beloved green Ireland and this harsh brown land would have been enormous.
Despite the tough conditions the sisters led by Mother John Synan would be joined by other young women wanting to be trained as a novice before becoming a Brigidine nun.  Sadly five of these young novices would die in the first few years.  However, after hearing about these courageous women other Catholic communities were asking the Brigidine sisters to establish schools for them.  In 1887 five sisters went to Cooma, seven were sent to Cowra in 1894 and another six to New Zealand in 1898.
As the community grew the Brigidine sisters realised that Sydney offered greater opportunities for the training of the novices.  Therefore, another convent, novitiate and secondary girl’s school were established in Randwick in 1901.  However, within forty years it was decided the novices should be moved to a more peaceful area and so the search began for land in the countryside of St Ives.  In 1949 seven acres of land was purchased on the corner of Mona Vale Road and Woodbury Road with another three acres acquired in 1951. 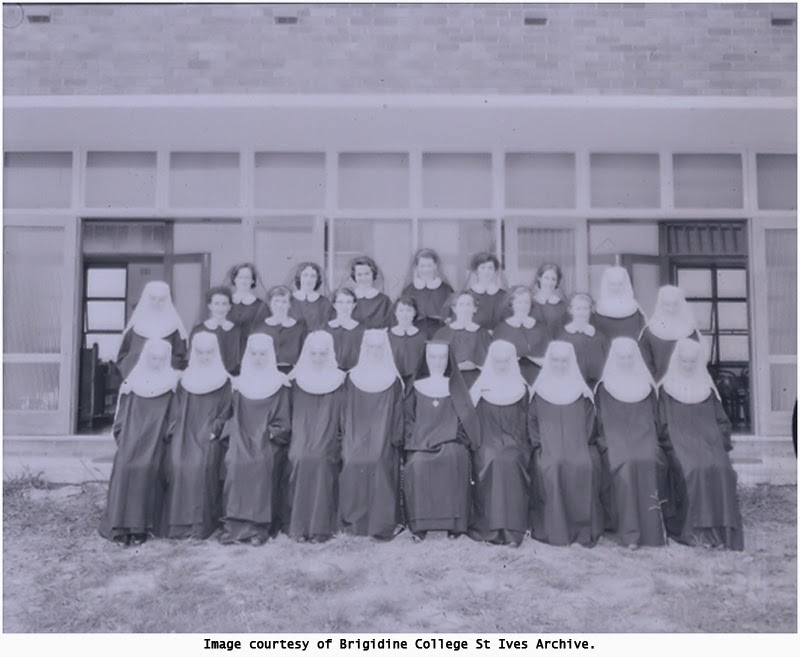 The Brigidine sisters established a secondary girl’s school in St Ives and on February 9 1954 classes began with nine students.  Although the new two storey building was for the school, the nuns would also live here until the convent was also built.  Upstairs consisted of four classrooms, however, the last room was partitioned off into four sleeping quarters and a community area for the sisters.  The ground floor had a store room, cloak room, toilets, chemistry lab, kitchen and laundry.  The kitchen of course was used for the students learning home economics but also for the sisters own cooking.  Two sisters taught the secondary girls here and another two taught the primary students at the local Catholic Church, Corpus Christi.

The Convent and Novitiate were completed by the end of 1958 and the Brigidine community steadily grew over the years.  The college added more buildings and took over the novitiate building in 1978 when it closed.  The sisters enjoyed many happy years at St Ives until they too moved out in 1994 relinquishing the convent to the college.  Although the Brigidine order is diminishing their legacy continues through the ethos and teaching of the Brigidine schools throughout the world.
Brigidine College St Ives now has over 900 students but acknowledges and appreciates the heritage given to it by the original Brigidine nuns from Mountrath, then Randwick and the new arrival of students in 1954.  The original students formed strong friendships being a small group and still join together each year for a ‘Pioneer’ lunch and reminisce their fun times. 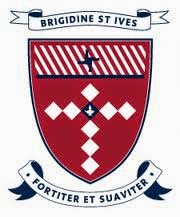 Brigidine College St Ives is dedicated to the education of girls in the Catholic tradition. Founded by the Congregation of Sisters of St Brigid in 1954, the school models the charism of St Brigid and Bishop Daniel Delany, strength and gentleness.
The College prides itself on providing a holistic education for girls, combining the spiritual, academic, physical and cultural dimensions of learning, creating women of spiritual, moral and ethical strength.
Girls at Brigidine are challenged to think and experience beyond their boundaries, to have the courage to question their world and model Christ’s teachings in their lives.
They are challenged in their learning to see possibilities, grow in understanding and value success.
Browse through our website to gain a deeper understanding of our community or join us onsite for a tour. There is a spirit in this school worth experiencing.

Posted by Mael Brigde at 9:48 pm No comments: