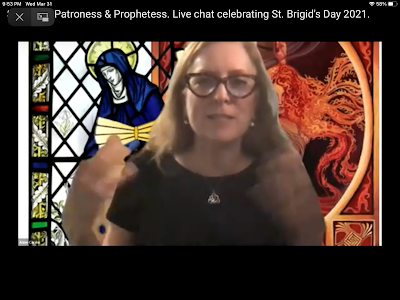 It’s up! The video of my conversation with Sister Mary Teresa Cullen and and Anne Cassidy Carew Of the United Irish Cultural Centre of San Francisco. I don’t think she mentions it here, but it was Sister Mary T who lit Brigit's flame in Kildare in 1993.

Me and My Mouth — A Time for Reflection on Its Use

I have had two occasions recently to reflect on things I have said — or not said — and how I’ve said them — that may be of use to other followers of Brigit as well. So I am setting them down here for your perusal.

I seem to have gotten a couple of peoples' knickers in a twist the other day, quite inadvertently, although I knew it could happen.

It was a matter of not guarding my words. I read someone’s innocent post in a Facebook group, wherein she referred to Brigit as a goddess of spring. Now, I have had my editing cap on in matters Brigidine for several years now, partly for working on my book, partly for teaching, partly just for my own understanding, and it’s become second nature to me. So when I read this post I immediately thought, but she isn’t a goddess of the spring. Saint Brigit has connections to the spring, but the goddess doesn’t. So I commented to that effect. I don’t think I put in a whole lot more explanation than that.

A couple of guys came back at me with different explanations of how I was wrong (heaven knows how the original poster took my helpful contribution) and I replied to each of them, trying to explain a little better what I meant, but not engaging too much otherwise. I don’t like squabbles and I also don’t think everyone has to see things the way I do. But I know these anonymous dialogues can get a little rowdy, so I try to keep them short.

I realise that I had left out things that might have helped people hear what I was saying a little better. That doesn’t mean anyone would agree with me, of course. But it might’ve put us on a more stable footing to begin with.  If I had said the written materials from the middle ages that refer to Brigit the goddess don’t mention the spring in any way, whereas the mediaeval writings about Saint Brigit and the folk traditions surrounding her have much to do with the spring, that might have helped.

Now we still could’ve gotten into trouble. Because of certain Victorian writers, we have all gotten the impression that the saint is modelled on the goddess, so we don’t think we need any proof of these sorts of details. If it’s connected to the Saint, it’s connected to the goddess. Equally, we often think that, as one of these gentlemen said, all of the Irish saints are built from pagan precedents, so we can directly extrapolate Pagan rites and stories from Christian — again, without need of evidence. This thinking is not our fault. Nor is it a bad thing. It’s just that I, and many like me, like to know what is old material and what is modern material so that we can make our own decisions about what we believe and how we understand the goddess, the saint, and the culture that gave rise to them. 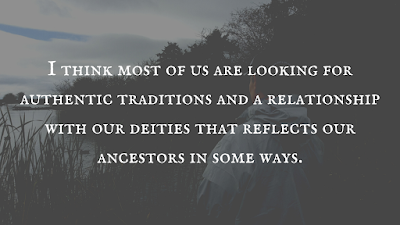 Read more »
Posted by Mael Brigde at 5:38 pm No comments:

I made this wacky 9 second video to celebrate fact that pre-ordering is available for my book. Exciting!

Posted by Mael Brigde at 7:09 pm No comments: