Welcome! Eye of my eye!


I went to St Andrew's Church Supply here in Vancouver today to pick up refills for the votive candles I use for my flame-tending shift. As I like to do, I noodled around looking at the statuary and cards and surplices and such. To my surprise there were two St Brigit statues--there have never been St Brigit statues there before. These two statues were nearly identical, except for the painting of the eyes. The one had perfectly symmetrical, belladona-widened eyes, giving her a pretty face. The other had one eye lower than the other, its pupil wider than its mate's, and the brow of that eye was arched. 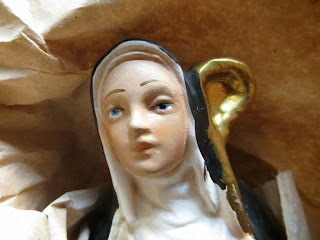 She was not, of course, typically pretty. She was unique, and her face was a little startling. As I looked longer at it, I began to get a sense of a life behind these eyes, a history, wisdom perhaps, and pain. 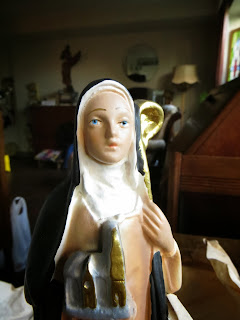 It of course made me think of the story in Leabhar Breac of St Brigit's self-mutilation in order to avoid being married off when she wanted to be a monastic. It's a tad horrifying: be warned.

Shortly after that came a certain man of good kin unto Dubthach to ask for his daughter (in marriage). Dubthach and his sons were willing, but Brigit refused. Said a brother of her brethren named Beccán unto her: ‘Idle is the fair eye that is in thy head not be on a pillow near a husband.’ ‘The Son of the Virign knoweth,’ says Brigit, ‘it is not lively for us if it brings harm upon us.’ Then Brigit put her finger under her eye, and drew it out of her head until it was on her cheek, and she said: ‘Lo, here for thee is thy delightful eye, O Beccán!’ Then his eye burst forthwith. When Dubthach and her brethern beheld that, they promised that she should never be told to go unto a husband. Then she put her palm to her eye and it was quite whole at once. But Beccán's eye was not whole till his death.


On the Life of St. Brigit (Leabhar Breac) (Author: Translated by Whitley Stokes)

It will not surprise you which statue I chose. Leaving the perfect one for another Brigidine who may wander in and find her with delight, I brought my new friend to the counter and from there, to my home. 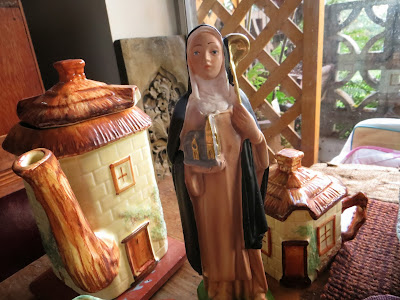 Brigit's Cross in an Unexpected Place

When my father was dying a few years ago, I idly noticed the pattern on his johnny shirt (hospital gown). It was a series of sketched crosses, including Brigit's cross. Somehow the thought that this battered, beleaguered man was wrapped in her mantle so tangibly was a comfort to me, though it would have meant nothing to him. 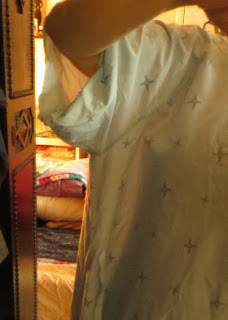 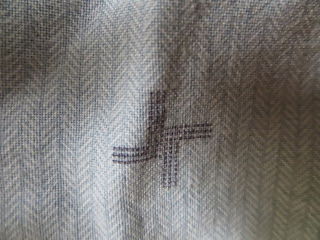 
I first came across the art of Warwickshire, England's  Maggie V. Jones in 2008, and was struck by its vibrancy. I see Maggie has less of an internet presence than she did then--a situation I hope changes. Here are two images she painted of Bride, lush wonders that refer to her link to bees. As this is the season for gathering honey, it is a good time to share Maggie's images.

The Celtic Goddess Bride (Brigid). Medium: Digital. Completed Imbolc 2009.
Copyright Maggie V. Jones
Two versions of this, and I personally prefer the latter. Others may beg to differ. 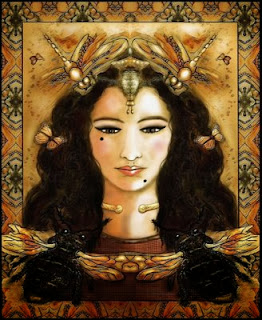 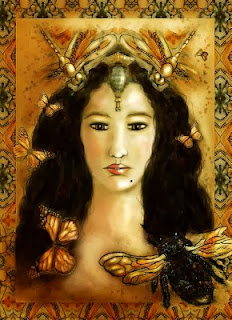 Maggie says of herself:

Posted by Mael Brigde at 8:09 pm No comments: