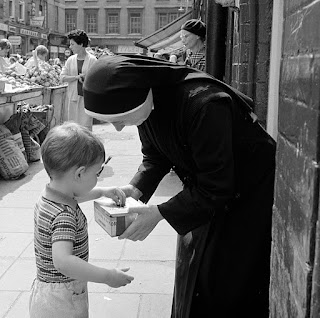 I had a dream last night that I was in Ireland. I had just arrived, and the first thing I did was go to Kildare. The sisters there (not the ones I met before--Srs. Mary and Phil, who actually live at Solas Bhríde) were busy organizing a massive rumble sale. I wish I could remember more detail, but what I do recall brought a chuckle today when I pondered it.

The sister I was talking with--very briefly as she buzzed around doing her work--was thin, elderly, and filled with energy. She was bossy as well as busy, used to giving orders and having them acted upon. She scowled a bit, annoyed with me asking where I should put my backpack and small suitcase so they wouldn't get mixed up with the merchandise. I put them where I thought she'd indicated and got lost in the rooms they had converted over to a marketplace for the fund-raiser.

It was good to be in Ireland. I enjoyed the nun and the people I bumped into, and everyone was keen on getting their bargains. Eventually I found my way back to the place where I thought I'd stored my things, and they were gone. I searched and couldn't find them. I asked the sister, and she shrugged it off, still busy and not really interested.

The only other thing I really remember is thinking to myself, "This happened last year when I came to Kildare, too. Every time I come I lose everything I've brought with me."

When I was reflecting on this dream today I asked myself who that nun was. Was she Sr. Mary? Clearly not. She was the superior, equally clearly. And then it struck me. She was Saint Brigit. And then this clicked in: everything I have ends up with her. Doing her work, supporting her community. And I don't mind. I really, really don't mind.

I left the place with a sense of amusement. Whether I had it in the dream I don't know--I don't think so. I think I was worried about what I was going to do without my stuff. But I didn't need to worry. I was in no real difficulty.

Thinking further about it now I recall the abundance reflected in Saint Brigit's stories. No one ever need do without. If she takes your stuff, she has a good purpose, and you don't go hungry. No one does hospitality like her. Even if she does get a little distracted and abrupt sometimes.

Posted by Mael Brigde at 8:54 pm No comments: