St. Brigid’s survived the 1906 earthquake, the great depression, two world wars – and an attempt by San Francisco’s Catholic archdiocese to demolish it.

The Committee to Save St. Brigid Church was successful in landmarking the exterior of the building, including the beautiful stained glass windows imported from Ireland. We are now working to landmark the interior.

St. Brigid Church is a cultural and architectural
landmark in the Marina, Pacific Heights
and Russian Hill neighborhoods. 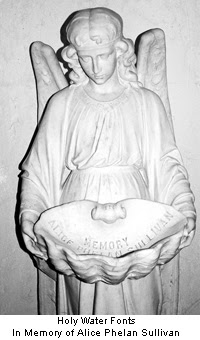 St. Brigid’s was built by Irish immigrants, the first group to settle the surrounding area. It was intended from its beginning to be one of the finest churches in the country and no expense was ever spared. St. Brigid’s became a source of pride not only for the Irish community but for all of Catholic San Francisco. San Francisco’s beloved Mayor George Moscone attended the adjoining parochial school (still in operation), and from here his funeral Mass was held. Generations of San Franciscans have called St. Brigid Church their spiritual home and have watched the important milestones of their lives play out within its walls.

This excellent example of Romanesque architecture has stood at the corner of Van Ness and Broadway for over 100 years. It withstood the 1906 Earthquake and Fire and contributed to the city’s recovery according to the legends and stories that filtered down through parish families.

In 2006, the exterior of St. Brigid Church including the Harry Clarke stained glass windows and the Seamus Murphy statues of St. Brigid surrounded by the twelve apostles, became San Francisco Landmark #252. At that time the City's landmark ordinance did not explicitly allow for interior landmarking. But soon after, Supervisor Jake McGoldrick 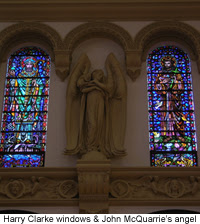 On January 6, 2009, Supervisor Aaron Peskin sponsored a resolution initiating the interior landmarking process for St. Brigid. An interior landmark application is now being prepared and will soon be heard by the Historic Planning Commission of San Francisco. You can help us achieve St. Brigid interior landmarking by registering your support. Please email us and let us know. We will keep you posted of upcoming hearings and how you can help. Thank you very much!