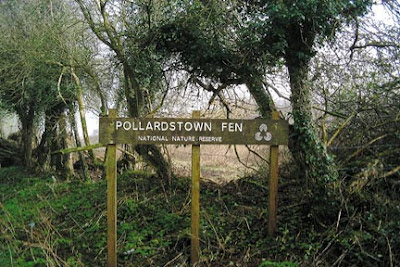 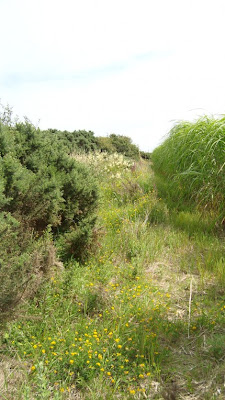 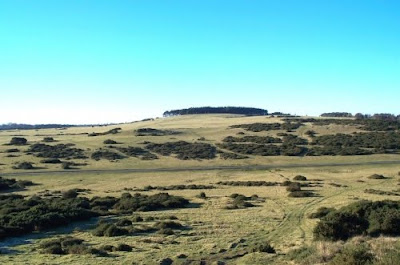 Sometimes we peer so closely at a given detail the context around it blurs away. I've been giving some thought today to Brigit's natural environment, in the area around Kildare. Here are a couple of things you might find of interest.

The plain which Brigit claimed from the king of Leinster with the old vastly-expanding-cloak trick is known today as The Curragh, and is more famous for its racehorses than its nuns. Overlooking this plain is the Hill of Allen, where Fionn MacCumhail and the Fianna of old were known to gather. On one edge of the plain is the ancient Pollardstown Fen.

The Curragh has until very recently been largely unenclosed, the greatest remaining piece of commonage in Ireland, where the beasts of the community were pastured together.

Bit by bit it is being divided--roadway, fences, turf-cutting, and so on. But much of the area is still home to a variety of wildlife and plants, as well as to sheep, horses, military personnel, and so on. Among the native inhabitants are bird's-foot trefoil, autumnal hawkbit, lady's bedstraw, wild thyme and tormentil, as well as skylarks, meadow pipits, chaffinches, snipe, song thrushes and stonechats. Rabbits have replaced the once abundant hares, and grey squirrels and foxes round out the mammalian population.

The Curragh itself is a shallow-soiled grassland resting on a deep gravel layer deposited during the last Ice Age. The many surface springs that cross it have created the marshy Pollardstown Fen, and their calcium-rich waters prevent the normal transformation of the fen into sphagnum bog. Thus the 12 000 year old fen allows a glimpse into an ecosystem now uncommon in Ireland, and one that Brigit herself would have been familiar with.

If you want to look in greater detail at the wildflowers you encounter in the hedgerows, pastures, and fen of Kildare, have a look at this elegant and extremely useful site: Wildflowers of Ireland by Zoë Devlin. It is organized so that you can find the flower before you in several ways, by its name, colour, location, family, and so on. The photos are clear and very helpful and there are links to maps where the flower has been found. Devlin is the author of 'Wildflowers of Ireland - A personal Record', from Collins Press Cork.

And to learn about the environmental issues facing check out the Inland Waterways Association of Ireland's page on Pollardstown Fen, "Examinind the Relationship Between Human Activities and Climate Change in the Wetlands of Ireland: FINAL TECHNICAL REPORT", or the paper The Kildare By-Pass and Pollardstown Fen by Catherine O Donnell as well as Preservation of the Curragh, a page on the site of the County Kildare Archaeological Society.

To learn more about Kildare's hedgerows, follow this link to The County Kildare Hedgerow Survey Report. For information on a variety of issues see the blog of the Irish Wildlife Trust Kildare Branch.