It took me an age to get this article and translation of Cogitosus's Vita Brigitae. When possible I will get a copy up on the Daughters of the Flame site along with the Liam de Paor translation that is now there. Look for the brilliant yellow button below to download the pdf. For now, I will just jot a couple of notes and give you the citation so you can track it down yourself.

By the way, in the introduction Connolly says they are preparing a longer work on the VB. Anyone know if this was ever done? A quick search has yielded nothing. 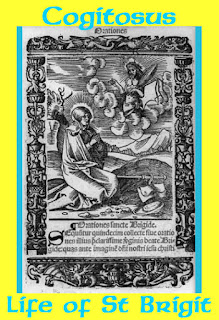 In his preface to a translation of Cogitosus’s Vita Brigitae, the author briefly discusses Cogitosus and his relationship to Brigit and to Kildare, and his presumed era of writing. Only three other works of this nature are available from the 7th c (Tirechan, Collectanea, Muirchu, Vita Patricii, both re St Patrick; Adomnan, Vita Columbae), with Cogitosus’s likely the earliest. VB is of particular interest to historians because it shows that in the 7th c Kildare was claiming for itself primacy over all the monasteries in Ireland, and because of what it tells about monastic life. It is of interest to archaeologists because of its references to continental trade, road-building practices, the construction of mills, and the physical layout of Brigit’s church.

Reminding us that the Irish Church was only two centuries old at the time of writing, Connolly examines the work’s “catechetical aim” of teaching religious values, particularly of faith and charity, to Irish Christians.

Repeatedly Brigit’s great faith enables her to perform miracles (all attributable to God’s power, not her own). Other recurring values are chastity and obedience, and her faith is shown in her devotion to prayer—the secret of her ability to intercede with God being her ceaseless, single-minded prayer—and to evangelism. This emphasis on preaching is supported in Vita I  (Vita prima Sanctae Brigitae) as well. (VI apparently written nearly a century later).

The second main value emphasised is charity, which expresses itself in numerous miracles, many of which are modelled on Biblical stories, which show “her concern for the poor, the oppressed or the embarrassed, or simply her guests, whether friends or strangers” (pg 9).

The language of the article is easily accessible to non-expert readers, and the ideas simple, with plenty of examples (mostly brief notations of where they can be found in the text, some with fuller explanation). He lays out with clarity his argument that Cogitosus in his Life has not simply “just strung together at random a series of miracles of folkloric interest to entertain his readers” (pg 6), but is purposefully directing his audience to a fuller understanding of and commitment to specific monastic virtues. Without familiarity with the Life itself some of the references, not being fully explained, lose some of their impact. It might be preferred to read the Life first, or to reread the introductory material once having read the Life.