By the artist who brought us-- 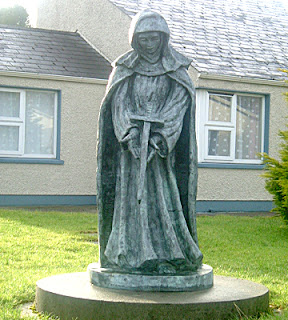 St. Brigid of Kildare - This sculpture of St. Brigid captures that moment where she gave her father’s treasured sword to a leper in the the presence of the King of Leinster. Before her father was able to strike her down, she explained that she had given the sword to God through the leper. The King, being a Christian, forade her father to strike her and granted her freedom saying “her ment before God is greater then our own”

--a new sculpture is unveiled. Or was, a year and a bit ago. How did I miss this one? Wish I could get a clearer image. 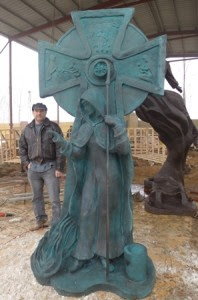 Sculpture of St Brigid with artist Tim Schmalz
A new sculpture of St Brigid by an internationally renowned artist is to be unveiled at this year’s Féile Bríde festival in Kildare which continues this week.
Canadian sculptor Timothy Schmalz, who created the 9ft bronze of Ireland’s famous female saint, hit the headlines in Co Mayo last March when he proposed erecting a 100ft statue of St Patrick on top of the Reek.
However, the sculptor abandoned his plans for that sculpture, which would have been higher than the Christ the Redeemer statute in Rio, due to strong local opposition.
His life-sized sculpture ‘Jesus the homeless’ depicting Jesus as a homeless man sleeping on a park bench recently found favour with Pope Francis who blessed it.
Now a permanent home is being sought for it in Rome near the Vatican.
The arrival of his latest sculpture in Kildare has been delayed by poor weather conditions. The statute of St Brigid was commissioned and donated by Fr Dennis O’Neill from St Martha’s Catholic Church in Morton Grove (a northwest suburb of Chicago), Illinois, USA.
Read more:
The priest wanted the sculpture to commemorate the 20th anniversary of the relighting of the flame of St Brigid in 1993 by the Brigidine Sisters and he asked that it be erected in memory of his parents, aunt and uncle.
“It hasn’t arrived yet due to the stormy seas. The priest who donated it arrived with 22 people from Chicago on St Brigid’s Day and he had photos of the sculpture and we had a little preview. We were able to show them the progress on the building (of the new hermitage)” Sr Mary Minehan told CatholicIreland.net.
The building of the new Solas Bhride Spirituality Centre and Hermitages began in March 2013 and the sculpture will be situated at the centre of this.
It is hoped that events at Féile Bríde, such as the evening of music with Luka Bloom, will raise some funds for Solas Bhride.
More than €3million has already been raised, and Sr Mary and the fundraisers are most thankful to all those who have donated. A further €800,000 has yet to be found.
“The theme of Féile Bríde this year is ‘Kindling sparks of Hope’. This time last year we hadn’t even turned the sod for the centre and we will be moving in this summer so that certainly is a spark of hope,” Sr Mary said.
Around 300 souls braved the downpour to attend the Brigid’s Eve well ritual last Friday which started Féile Bríde 2014. 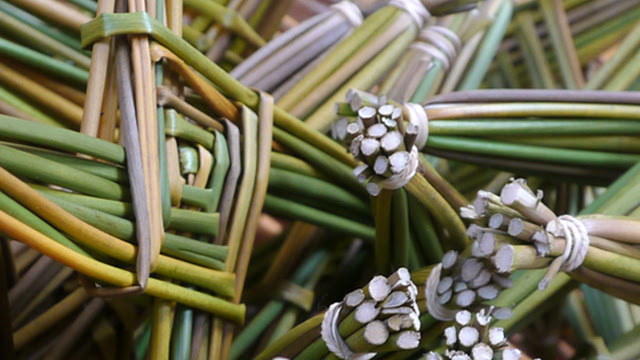 The festival which concludes with a Mass on Sunday at St Brigid’s Well, incorporates a variety of activities and many opportunities to learn about the St Brigid and how to weave her famous cross.
The Afri Justice and Peace Conference is part of the proceedings as are the more lighthearted moments such as the ‘Brigid, Bees & Brewing’ event.
Locals, people from all over Ireland and further afield are also participating according to Sr Mary who told CatholicIreland.net that she has already met a German pastor, someone from Kent, Holland and a group from Scotland.
For news updates from CatholicIreland.net follow us on Twitter: @CINetNews