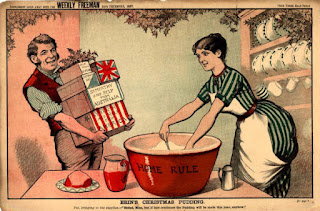 See the bottom of the post for some interesting reflections on the language from Quora.

As far as I can piece together, this Christmas hymn, which does not mention Brigit at all, could perhaps have been written by Bishop Moel Brigid (or Brigidian O'Brolcan), who died in 1097. (Not to be confused with Bishop Moel Brigid ((also nicknamed Brigidian)) who died in 1042.)* Which would make it of interest because of the name, very similar to my own and meaning "Devotee of Brigit."** It is interesting to know there is a "nickname" for Mael Brigde.

More likely, it is simply that the hymn is written in the "Brigidian" language, or presumably dialect. I am at a loss as to what is going on here. I have found a couple of references to it online, but not much. One is a plea for information posted in 2003 and never answered:

"I have run across a language that appears to be Gaelic-English-Romance-Germanic in origin. It is called "Brigidian." Does anyone know about it? All I could find on the internet were several sites having to do with "how to say...in 2 billion languages.
I found one of those sites, too:

Well, I have certainly never heard of the Brigidian language before, but it is fascinating, so I post this here to ask you if you have ever heard of such a thing.

The query above came from a Lowland Scots listserve, and there may be something to this connection, as hinted in this from Wikipedia:

Scots is the Germanic language variety spoken in Lowland Scotland and parts of Ulster (where the local dialect is known as Ulster Scots).[7] It is sometimes called Lowland Scots to distinguish it from Scottish Gaelic, the Celtic language which was historically restricted to most of the Highlands, the Hebrides and Galloway after the 16th century.[8] The Scots language developed during the Middle English period as a distinct entity.[9][10][11]

The interesting thing for me is, if there really is, or rather was, a non-Gaelic language in Western Ireland named Brigidian, whether it came over from Scotland, and why it is called this. Is there a connection to Brigit, or is it a superficial resemblance, with a different etymology?

Anyway, here is the hymn that started all of this:

This response on Quora is interesting. There are some other answers that are good, as well.

Is there really a "language" (or possibly hybrid language) called Brigidian? I stumbled across a prayer written in this language, said to be spoken in West Ireland. Never before have I heard of such a thing.
http://brigitssparklingflame.blogspot.ca/2018/02/silent-night-western-ireland-brigidian.html

** To learn more about the name, go here.

Admittedly, this image has nothing to do with the post, but when I looked for an Irish Christmas image on Wikimedia, this came up, and I thought it was too cool to pass by.