This post on is much more personal than I normally get here. In it I talk about the background to the poem "Hungry" that I published a few weeks back in Stone on the Belly. It does refer to hardships, without going into great detail, but it could be triggering for some. 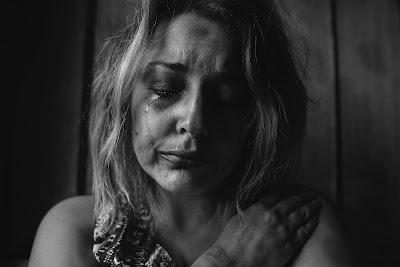 I published one of my poems on Stone on the Belly earlier this month, “Hungry.” It’s different from most of my poems about Brigit, saint or goddess or both, in touching on an aspect of her that doesn’t figure much in our musings about her. It bears marks that are more often attributed to The Morrigan, or another more martial deity. A saint who oversaw the army of Leinster in battle, who might mysteriously abandon her devotees and require appeasement in the form of a struggling bird buried alive at a place of magical power. A smith goddess whose implements are as likely, perhaps more so, to be tools of battle as cauldrons of plenty.

Brigit’s influence on my life has been one of tremendous healing, but it hasn’t come in the form of ease and comfort in a mother’s arms. It has come as an unyielding companion in battle, a friend in times of tending wounds. Brigit surrounded me as I received blow after blow to my person, my dreams, my sense of being in this world. She remained as I tried to form myself again.

I couldn’t feel her, most of the time, or see her standing over me. Yet I turned to her, nevertheless. Again and again, over decades, I built on the relationship I had with her and with her followers – with myself – and from my current vantage point, standing on this threshold place — a hilltop overlooking a wild sea — I see the shape of her in my own unfolding life.

In her company, I have strengthened, purified my understanding, let go, let go, and then let go still more of all I thought I was and could be, or have, in my life. My suffering, like the suffering of that poor smothered bird or the folk who killed her in their fear, has been and will be unavoidable. But in Brigit’s company, and in your company, I have gradually learned to hold my own in the churning seas, to retreat from battlefields or to fight when needs be, in ways that are not so cruel to myself or my opponent. I have been ashamed of my actions, my words, when I let them fly untempered. I have been landless, cowless, without even the Fianna, it seemed, but in fact, there have always been others. Friends, family at times, sisters and brothers on Brigit’s path. We have been bruised yet continuing, rising up again and again, learning from our poorly moulded states, being transformed not once, but a thousand thousand times.

I raise my hands in gratitude to Brigit and to you, my companions in this sometimes treacherous, sometimes blissful, always precious life.

Original Poem: “Hungry” by Mael Brigde on Stone on the Belly.

Image: "A honest look at the pain of mental illness." Photo by Kat J on Unsplash.