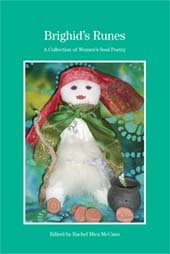 
I'll be brief here as the reviews are not long, themselves. Each of the four books brings something of interest and value. Two are Christian, tinged with the rosy blush of the Celtic Twilight, one is Christian, but embraces to some degree the saint’s pagan roots, and bases the story on diligent research, and the last is NeoPagan poetry that has little to do with Brigit herself.

T.R. Henn, in his introduction to Synge’s The Playboy of the Western World, wrote that “Lady Gregory herself could achieve a comedy as refined as her gay and gracious nature, and a tragedy, pathetic or patriotic, fitted to her vision and gifts” (pg 37). This is evident in her Passion Play, The Story Brought By Brigit. The story is tightly scripted and effective, with poems sparsely interspersed in the dialogue. The characters speak in a homey Irish manner, which at first is surprising but which becomes comfortable and pleasant, to my ear, anyway. When a minor character speaks of oppression and rebellion we can easily read English where he says Roman. But if we are hoping to get more than a glimpse of the great lady herself (Brigit, not Lady Gregory) we are to be disappointed.

The play’s conceit is that if Brigit could be present at Christ’s birth (as in Irish and Scottish folk tales), why not at his death? St Brigit arrives in Jerusalem shortly before Passover in order to see Christ for herself, but she is very seldom on stage and has few, brief lines and no role in the action. Where she does surface is in the notes at the end of the play, where the author discusses Brigit’s connection to Mary and Jesus in Irish and Scottish folklore, pointing out that whereas in Scotland Brigit is thought to have gone to Palestine to Jesus’s birth, in Irish tales Mary and her son come to Brigit. Although the play itself has nothing to say about Brigit, the notes do share some lovely images.

“Our tradition, and that of Gaelic Scotland, speak (sic) of St. Brigit as ‘the foster-mother of Christ’, and I have been told by poor women of Slieve Echtge that she succoured both the Blessed Mother and Child when they were brought here by a Heavenly Messenger for safety in Herod’s time, and that she ‘kept an account of every drop of blood He lost through His lifeftime.’”
pg vi
“The two names are constantly put together, ‘calm, generous Brigit,’ ‘mild, loving Mary.’ And in the dedication, the binding, of the young hunter ‘not to kill a bird sitting, or a beast lying down,’ he was bade remember ‘the fairy swan of Brigit of the flocks; the fairy duck of Mary of Peace.’
pg 92

Those interested in a play that actually concerns Saint Brigit, Norah Kelly’s St Brigit of the Mantle, also published in 1924, is the one for you.

First produced in Gloucester Cathedral in 1923, this play is a lovely blend of Celtic Twilight Paganism and unpretentious Christian evangelism. Kelly acknowledges her debt to “‘Fiona MacLeod’ (William Sharp)” for her version of the legend of Brigit.

William Sharp was, with WB Yeats, Lady Gregory, and others, a Celtic Revivalist. This movement drew on traditional Celtic literature and art but did not reproduce them exactly, using them as the loam on which to seed a new self-image for Celtic people. As was Yeats, Sharp was a member of the Hermetic Order of the Golden Dawn, an occult group famous now for the membership of Aleister Crowley.

How Sharp’s occultism influenced his writing would make an interesting study, but regardless, with this acknowledgement we know that we can’t assume the story “MacLeod” has written, and Kelly bases her play on, is traditional. Had she used a story collected by some diligent folklorist, or an old Life of St Brigit, a vision she’d had at prayer one night, a tale handed down by her grandmother, we would watch out for different elements, trust the material in different ways.

The legend as given is a unique take on the life of St Brigit, bearing elements that likely stem from Scottish legend but which havebeen liberally embellished.

A herdsman named Dughall and his daughter Brigit, ordinary peasants, live on the Scottish island of Iona in the Hebrides in the mid-6thcentury CE. Only the local Arch-Druid knows that Dughall was a prince of Ireland, exiled for having allegedly made pregnant a Princess Mora. Both she and he protest his innocence—the child, she says, is an immortal, a daughter of the Tuatha De Danann1.

A storm washes their boat ashore on Iona, killing all but the father and child. Brigit proclaims that one day she will hold “the King of the Elements Himself” in her arms. They are welcomed by the Arch-Druid of Iona who links this statement to a prophecy that “a child of the immortals” would one day “hold eternity in herarms”, neatly combining Pagan and Christian symbols and marking Brigit as an Otherworld being.

Brigit grows up in Iona. Inspired by the Druids’ offerings to a “Most High God”, she time travels “in search of a deathless love” through a gate of quicken trees (either the mountain ash or the service-tree, both in the genus Aucuparia), trees with Otherworld associations. She arrives in Palestine, in therole of the inn-keeper’s daughter2at the “Rest and Be Thankful”, in time to offer lodging to Mary and Joseph and attend the birth of Jesus. In keeping with the traditions of Celtic Otherworld adventures, she is gone for a year and a day.

The prose is delightfully “old fashioned” and well put together. In a wonderful aside, Brigit worries about the cattle of Palestine, caught in drought, and says “scarce a drop of milk will they give, and that only after the milking lassies have sung tune after tune tothem...” I don’t know about the milking lassies of ancient Palestine, but this is exactly how the Irish dairymaids approached such a problem.

It is intriguing that the heavy Pagan symbolism, given in a positive light, is accepted and absorbed into the Christian story, rather than being rejected outright as at other times and places. But be not confused, this is purely Christian in its intent.

Thestory of Jesus’s birth is of course is a familiar one to those raised in Christian tradition, but the infusion of Brigit—disobedient, sincere, and generous to a fault—and the melding of her medieval vitae with the biblical tale is delightful. Introducing Celtic saints into biblical stories (and vice versa) is not uncommon and gives a wonderfully accessible and neighbourly feel to both the saints and the stories themselves. No longer a tale of a remote time and place, it is an incident fresh and real as today’s new churned butter. Mary chastises the storm for threatening to wake her baby. Brigit offers refreshment that grows no less for the drinking. She swaddles Jesus in her blue cloak to keep him warm, and Mary responds that henceforth she will be known as Brigit of the Mantle.

In the closing scene, Brigit has returned to Iona, now blessed with the knowledge of deathless love, to bring Christianity to her “own sea-girt isle...that never more may Druid-worship sway the people’smind.” Ah, well.

Nicely done, all told, and with the various hymns prescribed for scene openings, I can see that a very pleasant afternoon could come of the staging of this play.

1In the statement that Brigit is a daughter of Pagan deities we find a nontraditional element undoubtedly introduced by either Sharp or Kelly.
2See Bryce Milligan’s Brigid’s Cloak: An Ancient Irish Story (picture book) for another instance of Brigit’s assuming this role in fiction. 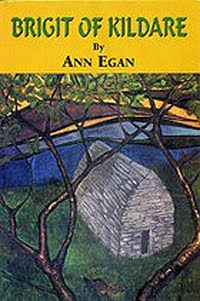 This novel is reviewed in the previous post—Brigit Book Reviews (Series Two) but I want to mention it here because Egan, an award-winning Irish poet, has included a number of excellent Brigidine poems.

the touch of her small hand
cool as a breeze-kissed petal
on my hard warrior’s palm,
the woodbine tendrils on her brow

have me within her spell, I am
bondman to my druid daughter.
To her I bequeath my sword,
its hilt aglow with rubies.

When I heard about this book I imagined that the poems would have something to do with Brigit, but almost without exception, they do not. Instead, they are dedicated in a more generalized way to Goddess, sometimes to specific goddesses, such as the Cailleach, or to the process of ritual and awakening, from a woman’s perspective.

There are some very nice pieces in here. All of the poets are connected in some way to Scotland, England, Wales, or Ireland. They range in poetic experience from relative newcomer to adept, but the sensibility throughout is one of celebration, connection, growth, and joy. The youngest author is in her teens; another has gone on to the Land ofthe Dead. A very pleasant collection under the aegis of Brigit, patron of poetry.

Samples from the poems:

I have a Venus urge
for slow love making
soft kisses, smooth caresses
Autumn cooking,
pickles, stewed apples and spices.
I feel my body soften
as the gentle waning sun beckons me outside,
to pick up hazlenuts from the warm afternoon track,
so that I can bake wisdom cake.
My love for you.

It was in the wreckage of kelp limbs I found you
The long crescent of your thigh,
a shade quicker than sand,
woven in the tidal reach, the tangle of sea

dried into cloth or food,
dried salt around your lips
your sea fingers
open and
close about drifted wood...