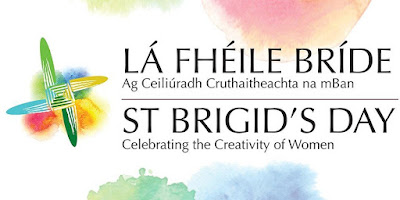 I'm so excited! Vancouver is to have an annual celebration of Saint Brigit's Day. The group "Lá Fhéile Bríde: Celebrating the Women of Ireland - Vancouver," are kicking it off this 31 January and lasts till 7 February.

"Many Irish women have a connection to St. Brigid who is known as 'Mary of the Gael’ and considered to be Ireland’s other patron saint. Now, the first annual Feile Bride: Celebrating the Women of Ireland is coming to Vancouver on Sat. Feb. 1, 2020." (Clearly this needs to be updated. It's now stating on Oíche Fhéile Bríde - the night before.)

The festival will feature workshops, panels, and stories. It's too soon to sign up for anything (I tried!), but watch their spaces for further information.

Jennifer Bourke, Vice Consul General of Ireland in Vancouver, tells us that the consulate will, "facilitate a “Pop-up Illumination” as part of the International HerStory Light Festival which is focussed around St. Brigid's Day."